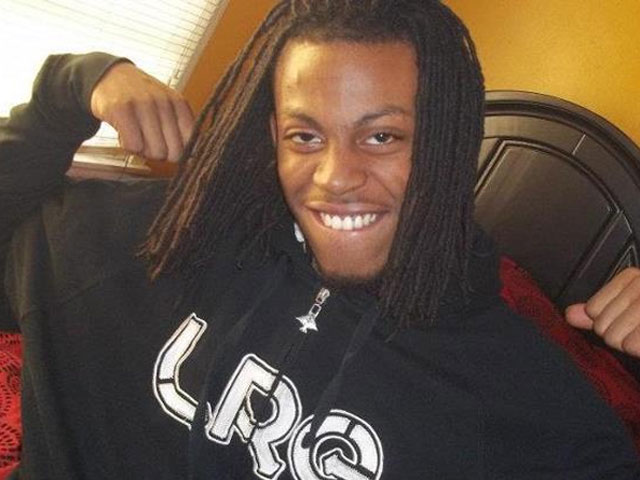 (CBS/AP) LITTLE ROCK, Ark. - Police in Arkansas released a video reconstruction Tuesday meant to show how Chavis Carter could have shot himself in the head while he was handcuffed in the back of a police car.

In the video, an officer played the part of Carter, 21, a Southaven, Miss., man who died from a gunshot wound to the temple on July 28 despite being frisked twice by Jonesboro police officers.

Carter was black and both of the officers who arrested him are white, a dynamic that has generated suspicion among some members of the city's black community.

The officers stopped a truck in which Carter was riding after they received a report of a suspicious vehicle driving up and down a residential street. They arrested Carter after learning he had an outstanding arrest warrant related to a drug charge in Mississippi. Police also alleged Carter had marijuana.

In producing the video, the agency used the same type of handcuffs that were used on Carter and the same model of handgun found with Carter after he died, a .380-caliber Cobra semi-automatic. An officer of similar height and weight to Carter - 5 feet 8 inches, 160 pounds - sat in the back of a cruiser, leaned

over and was able to lift the weapon to his head and reach the trigger.

As far as how Carter concealed the gun, Yates said it's possible he hid it in the patrol car after officers first frisked him. He was then in the car unhandcuffed until officers eventually decided to arrest him. They then conducted a more thorough search of Carter.

"It's obvious they did miss the weapon on the first search. It is likely, since he was placed into the car unhandcuffed the first time, that he had an opportunity to stash the weapon in the car," Yates said. "The second search, which was more thorough and inclusive, did not disclose the weapon either."

The incident and the subsequent investigation has prompted criticisms of the Jonesboro Police Department. Several critics came to a Monday night meeting about the department's reaccreditation.

George C. Grant, retired dean of the library at Arkansas State University in Jonesboro, asked that the reaccreditation be put on hold until the investigation into Carter's death is complete, The Jonesboro Sun reported. Grant and others also complained that Yates hasn't pushed to hire minorities. Only three of 145 members of the police force are black, the Sun reported.

Yates didn't offer a timetable for when the internal police probe would be complete. He said he's waiting for an autopsy report, a report from the state Crime Laboratory on the gun and details on Carter's phone records.

Russell Marlin, a Memphis, Tenn.-based attorney representing Carter's family, said Tuesday that he's conducting his own investigation. Martin said it was too early to give his own assessment of how Carter died, but he said Carter wasn't suicidal. Martin said he would make a statement once his inquiry is complete.

"By all accounts, he was a healthy, happy guy. There's no reason to think he would have killed himself," Martin said.

Meanwhile, the FBI is monitoring the case. The state and local branches of the NAACP have asked the Justice Department to investigate.

Prosecutor Scott Ellington, who will review the investigative file to determine whether any charges are warranted, said he didn't expect to receive anything before the end of the week.

Police say video and audio recordings, as well as statements from witnesses, show neither officer pulled his weapon nor fired a shot during the traffic stop. Police have refused to release those recordings, citing the investigation.

Yates said other agencies have contacted him and told of similar incidents that occurred over the years.

Less than two weeks after Carter was shot, a man shot himself in the torso while handcuffed in the back of a patrol car in Mobile, Ala. The man survived. Police who searched him found two knives but missed the gun.