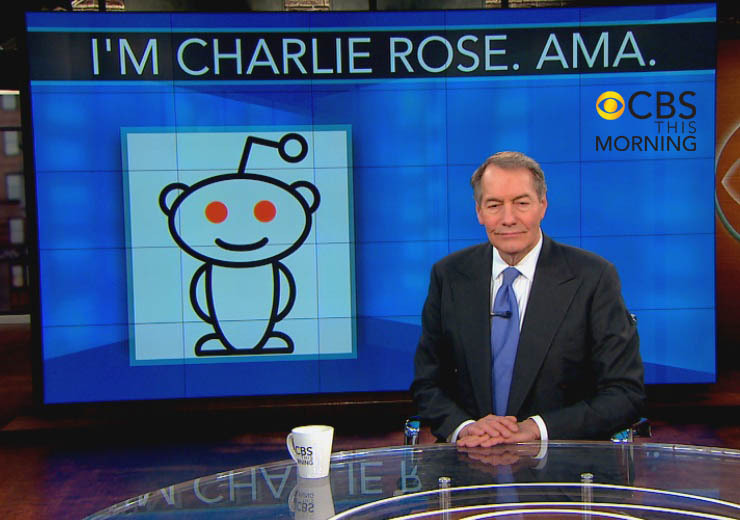 (CBS News) Charlie Rose, co-host of "CBS This Morning" and host of PBS' "Charlie Rose" sat down for a candid conversation Tuesday morning and he was the the one answering the questions, for a change. Rose took to link-sharing site Reddit to field questions from Reddit users on a range of subjects -- from his favorite meal, to early career aspirations, to his "remarkable" dog Barclay.

Charlie took a question from Reddit user AntoniusMagnus, who asked for the story behind the host's black eye last year and addressed user JumpinJesus' question about his reported role in settling a feud between media personalities Keith Olbermann and Bill O'Reilly.

Charlie on his last meal, NY restaurants
How Charlie Rose really found his dog Barclay
Charlie Rose on misconceptions about show guests
What Charlie Rose does during his down time

Read some highlights from Charlie's Reddit "Ask Me Anything:"

Who's been your favorite guest over the years? -Scumbag_Stevo

It's hard to say. I think mainly of fields. Among politicians, certainly Bill Clinton because he's engaged by a whole range of subject matter. When I think about athletes, probably my favorite guest of all time among baseball players was Ted Williams. Richard Serra, the great sculptor, personifies an artist for me. When I think about science, certainly Eric Kandel because of the Brain Series we did. Actors: Clooney, because of friendship, but British actors are interesting because of simply the diversity of what they bring to the table from Shakespeare to comedy to James Bond. The person I've always wanted to interview but never met was Richard Burton. I also like a lot of directors; the one I've never interviewed is Spielberg, but I like Sam Mendes. As a general rule, I like artists and writers -- people who are creative. Increasingly, I find scientists interesting because of their work.

Can you name a guest who made you laugh so much that you had a difficult time continuing the interview? -Diss_Gruntled_Brundl

Easy. Robin Williams. He went on a riff about my heart surgery and I don't know if there's an improvisation comedian that's ever been better than Robin Williams.

I loved seeing your handsome and well-behaved dog, Barclay, on CBS one morning. What's his story? Is he really from Scotland? -Pandsarecute123

Barclay thanks you for that question. It's a great time in his life because he's just getting ready -- hopefully, hopefully -- to become a father. It is a true story. He came from Scotland. A friend of mine had another black lab from Scotland and he brought back two more: One for his daughter, and one for me. I met Barclay when he was two and he's just a remarkable dog. He's smart, athletic, he knows who he is, and he can do anything -- outrun every other dog, jump a 3-foot fence, and everything the best dogs can. So we're looking forward to seeing what happens if he gets along with this new friend.

If you would not have gone into journalism and television, what career would you have chosen? What fields intrigue you enough to perhaps considered? -Rachro