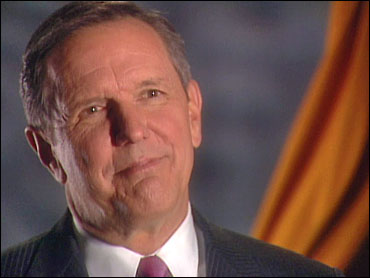 Considered one way, Charles Gibson 's career in TV news seems to be a model of stability: 34 years logged with one employer, ABC. There, he did his job well and rose to the top echelon of his profession, forming a firm bond with his viewers and offering his gracious signoff, "I hope you had a good day."

On the other hand, Gibson, who Friday retires from the "World News" anchor desk and from ABC as a full-time employee, is bowing out as more than an admired network news star.

At 66, he's a proven utility player, game to handle a range of positions and scramble to the rescue when needed.

It was in 1975 that Gibson joined ABC News, where he was named White House correspondent a year later. After numerous other assignments, he began a long stretch as co-anchor of "Good Morning America" in 1987, then left in 1998 to serve as a co-anchor of the "Primetime Thursday" newsmagazine for six years.

This might seem like a steady-as-he-goes career climb. But in 1999, less than a year after exiting "GMA" for prime-time prominence, Gibson was summoned back for supplementary service in the morning-show trenches. He and ABC News colleague Diane Sawyer (a morning-TV veteran from her days at CBS) were good soldiers and resumed setting their alarm clocks for the middle of the night.

Their first morning together they were chipper as they greeted their audience:

"Hi, I'm Diane Sawyer from Louisville, Ky. - the new kid on the block."

"And I'm Charles Gibson, originally from Evanston, Ill. I hope you remember the old kid on the block."

Their mandate: to stanch the ratings hemorrhage at "GMA" during Gibson's brief time away. The chemistry between them worked, and what was conceived as stopgap triage continued for more than seven years.

Then Gibson announced his departure for a second time.

Demonstrating his versatility that final week on "GMA," he reported on terrorists and politicians. He also furnished his audience with another kind of news flash: You can potty train your toddler in just 24 hours (or so claimed his on-camera interviewee, who had written a book on the subject).

But Gibson was already involved in another mission for ABC News.

A year earlier, in 2005, "World News" anchor Peter Jennings died from lung cancer. Then, early in 2006, Jennings' co-successors were both forced to give up their roles at the anchor desk: Bob Woodruff was gravely injured on assignment in Iraq, and Elizabeth Vargas was dealing with a difficult pregnancy.

Again, the network turned to Gibson. For several weeks, he even did double duty. There he was, at the crack of dawn on "GMA," then at dinner time on "World News."

By July 2006, he was finally free to concentrate on "World News" while serving, at last, as the face of ABC News.

Since then, he has led "World News" in its spirited battle with customary ratings champ Brian Williams at NBC's "Nightly News" as well as Katie Couric, who in a whirlwind of publicity arrived at "The CBS Evening News" shortly after Gibson's "World News" induction, only to languish in third place.

It is this high office that Gibson is vacating after Friday's "World News" broadcast.

In an orderly and low-key passing of the torch, Sawyer will replace him Monday at the "World News" anchor desk.

Meanwhile, in Gibson's new life of much-earned retirement, he presumably will still be hoping viewers tuned to "World News" have "had a good day."