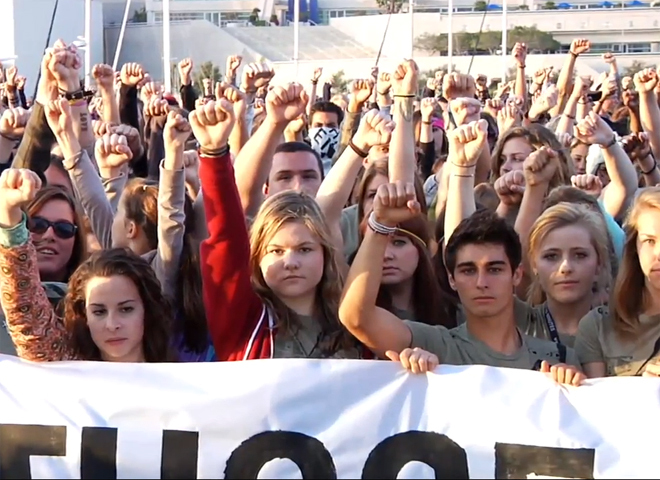 Within four days a San Diego-based charity's half-hour film about a Ugandan warlord accused of kidnapping up to 30,000 children in the past 26 years - turning girls into sex slaves and boys into child soldiers - has been watched 50 million times, mostly by teenagers.

Invisible Children produced the film "Kony 2012," about Joseph Kony and his Lord's Resistance Army, with a shrewd strategy to promote it: They posted it on YouTube on Monday and asked viewers to message 20 handpicked celebrities to tell them to spread the word. It worked.

Yet the group has been criticized for how much it spends on marketing instead of direct aid to Africa.

According to Invisible Children's most recent financial report, the organization last year took in $13.8 million - about 34 percent from general donations and their "Schools 4 Schools" program; another 22 percent from grants and partnerships; and the rest primarily raised from book and product sales and legacy gifts.

Zach Barrows of Invisible Children told CBS News, "We've never pretended all the money goes to the ground, because we don't believe that's the best use. The best use is spreading the word and then doing the highest-impact programs possible on the ground."

On "CBS This Morning" Friday, Jedidiah Jenkins, the director of ideology for Invisible Children, defended the group's expenditures - both in Africa and through its advocacy. He also discounted the comment of one Ugandan journalist who characterized the viral video as a passing fad for Americans whose attention will be on something else next week.

"Our dream for this movie was to get 500,000 views in the year 2013," Jenkins told Charlie Rose. "So the fact that it took off like it did only shows that young people specifically are so hungry for someone to voice their world view, which is, 'We're all equal, we're all human beings and there's no excuse that a kid on the other side of the world could be tortured and kidnapped and not us.'

"So I think that shows an endemic change in the way people see themselves. So it's not going anywhere."

"Shouldn't your mission and your goal be to make sure it changes something for the children there?" asked Charlie Rose.

"Absolutely, that's the point. Our goals are twofold: Our goals are to prove the universal through the specific, so the specific example is stopping the LRA (Lord's Resistance Army) and rehabilitating the region that [Kony's] terrorized for 26 years. It's a region the size of California. There's hundreds of thousands of people that have been impacted by his brutality. We've worked with local partners, we're very strategic with our programs on the ground.

"But our other key goal is to change the mindset of Western young people to see themselves as global citizens. That's equal, in part, to waking up the empowerment of young people around this world that they can do something profoundly good with their life."

Jenkins detailed some of the work that Invisible Children has done in Africa: "We have kids around the world have raised money to build what we call an early warning radio network. In Congo, Central African Republic, there's no communication there. So we've built radio towers so that the villages can communicate with one another so they can protect each other from LRA attacks.

"Now a large majority of the money actually goes to rehabilitate the most affected region which is northern Uganda, which lived through this for 18 years before the LRA moved into Congo. What we do there is we put kids in school, we rebuild schools that have been destroyed by the war, we give these kids mentors because they've lost family members to the war. We give formerly abducted women who have rebel babies, we give them jobs as seamstresses through our Mend program. We teach adults how to read.

"The truth is, if you want sustainable peace, if you don't want to see another warlord rise up, these people have to have a bright economic future. We want a holistic approach to really rehabilitate the region to create lasting peace."

To watch the entire interview with Invisible Children's Jedidiah Jenkins click on the video player above.

To watch Invisible Children's "Kony 2012" video, click on the video player below.