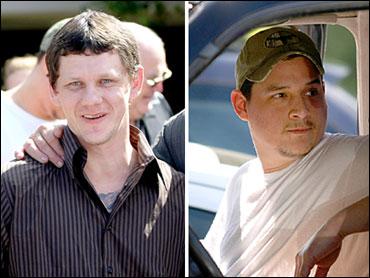 Two white men accused of killing a black man in a racially charged dragging death in East Texas were released from jail Thursday after murder charges were dismissed, the prosecutor said.

Shannon Finley and Charles Crostley were released Thursday afternoon in Paris after a judge granted the special prosecutor's motion to dismiss the case. The two men had been charged with fatally striking 24-year-old Brandon McClelland with a pickup truck in September following the trio's late-night beer run to Oklahoma.

The case was hampered by a lack of eyewitnesses and physical evidence. Last month, a gravel truck driver gave a sworn statement acknowledging he might have accidentally run over McClelland.

Special prosecutor Toby Shook said the investigation will continue, and that Finley and Crostley have no restrictions on their freedom. The gravel truck driver is unlikely to face charges.

"After investigation, it has been determined this case should be dismissed in the interests of justice," Shook said. "The decision is about the state of the evidence in the case as it exists today."

The dismissal was met with incredulity by civil rights activists who had protested how county authorities handled the case.

"His body was dragged and nobody gets charged?" said Brenda Cherry, a Paris resident and the president of Concerned Citizens for Racial Equality. "Even if a trucker came forward, that's all it takes? Even the trucker's not charged? If you hit someone, you don't get charged? Nobody gets charged with this?

"It's not surprising, but it's sad. It appears that a black man's life means nothing here in Paris."

Attorneys for the two former defendants also said they were not surprised their clients were freed - albeit for different reasons.

"I believed all along there was insufficiency of the evidence," said Ben Massar, Finley's attorney. "The facts in this case did not add up to these two kids being guilty of the charge."

Finley and Crostley had been unable to post their bonds and had remained in the Lamar County jail since being arrested last year. Finley's trial had been scheduled to begin next month, with Crostley's to follow in September.

"He was very happy. He knew that this was going to happen," Massar said of Finley. "He was a little disappointed it took so long, but he was very grateful."

Crostley's attorney said both defense lawyers worked closely with Shook to get the dismissal.

"I think it's very simple," said David Turner, Crostley's lawyer. "These fellows didn't do it."

Authorities had said Finley, Crostley and McClelland were friends who drove across the Oklahoma border for beer in September. They argued on the way back about whether Finley was too drunk to drive, and McClelland got out of the car to walk home.

Authorities alleged that Finley then ran down McClelland, whose body was caught under the truck and dragged about 70 feet. His mangled body was found along a country road.

The racial implications of the case reminded some of the East Texas dragging death of James Byrd in Jasper 11 years ago and brought out about 200 protesters, many of them from the Nation of Islam and the New Black Panther Party. The rally last year also attracted at least one acknowledged member of the Ku Klux Klan to Paris, about 90 miles northeast of Dallas.

The protest was not the first event indicating racial problems in Paris, which is about 73 percent white and 22 percent black. In 2007, a black girl was sentenced to up to seven years in a juvenile prison hundreds of miles from her home for shoving a teacher's aide at school, while a white girl was sentenced by the same judge to probation for burning down her parents' house. The case drew international media attention.

In March, civil rights attorneys alleged discrimination at a pipe fabrication facility that employs about 700 workers in Paris. Two black workers alleged widespread racism and said supervisors did not respond to complaints about racist graffiti, nooses and slurs.

"Hopefully this will go some distance in healing race relations in Paris," Turner said. "It was not motivated by race or any criminal intent. It was just a tragic accident."

Deric Muhammad, a Nation of Islam member from Houston who helped organize last year's protest, called the dismissal "too see-through, too weak, too cellophane."

Shook said he spoke with Jacquline McClelland, Brandon's mother, to tell her he was dismissing charges. Her voicemail box was full, and a friend told The Associated Press she was not at home.

"As you can imagine, Ms. McClelland is very upset over this entire process," Shook said. "She is a very brave woman and she is trying to deal with all these issues. Your heart goes out to her because she has lost her son. She is having to continue to deal with his death and having someone brought to justice in it. It is a frustrating experience."