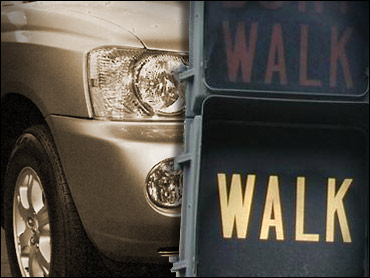 After clocks are turned back this weekend, pedestrians walking during the evening rush hour are nearly three times more likely to be struck and killed by cars than before the time change, two scientists calculate.

Their study of risk to pedestrians is preliminary but confirms previous findings of higher deaths after clocks are set back in fall.

It's not the darkness itself, but the adjustment to earlier nighttime that's the killer, said professors Paul Fischbeck and David Gerard, both of Carnegie Mellon University in Pittsburgh.

Fischbeck, who regularly walks with his 4-year-old twins around 6 p.m., is worried enough that he'll be more cautious starting Monday.

"A three times increase in the risk is really dramatic, and because of that we're carrying a flashlight," he said.

Fischbeck and Gerard conducted a preliminary study of seven years of federal traffic fatalities and calculated risk per mile walked for pedestrians. They found that per-mile risk jumps 186 percent from October to November, but then drops 21 percent in December.

They said the drop-off by December indicates the risk is caused by the trouble both drivers and pedestrians have adjusting when darkness suddenly comes an hour earlier.

The reverse happens in the morning when clocks are set back and daylight comes earlier. Pedestrian risk plummets, but there are fewer walkers then, too. The 13 lives saved at 6 a.m. don't offset the 37 lost at 6 p.m., the researchers found.

The risk for pedestrian deaths at 6 p.m. is by far the highest in November than any other month, the scientists said. The danger declines each month through May.

The Insurance Institute for Highway Safety of Arlington, Va., in earlier studies found the switch from daylight saving time to standard time increased pedestrian deaths. Going to a year-round daylight saving time would save about 200 deaths a year, the institute calculated, said spokesman Russ Rader.

The risk at 6 p.m. in November, after daylight saving time ends, is 11 times higher than the risk for the same hour in April, when daylight saving begins, according to the Carnegie Mellon researchers.

Fischbeck and Gerard used federal traffic fatality data that they've incorporated into a searchable database for different risk factors. Their analysis was not peer-reviewed or being published in a scientific journal.

But it does jibe with other peer-reviewed studies that looked at raw fatalities.

A 2001 study by John M. Sullivan at the University of Michigan looked at national traffic statistics from 1987 to 1997 and found that there were 65 crashes killing pedestrians in the week before the clocks fell back and 227 in the week after.

Fischbeck and Gerard found the increase in fatality risk after the end of daylight saving time is only for pedestrians. No such jump was seen for drivers or passengers in cars.

Once everyone "springs forward" to daylight saving time in April, there is a 78 percent drop in risk at 6 p.m., they said.

But overall for the evening rush hour, turning the clock back is a killer. In seven years there have been 250 more deaths in the fall and 139 fewer deaths in the spring.

"This clearly shows that both drivers and pedestrians should think about this daylight savings adjustment," Gerard said. "There are lives at stake."