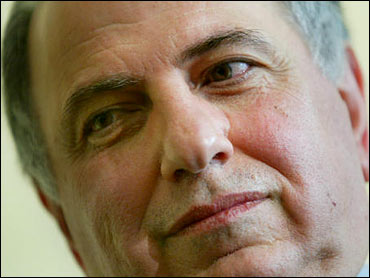 Ahmad Chalabi and his nephew Salem Chalabi said Monday that warrants issued for their arrests by Iraq's Central Criminal Court were part of a political conspiracy trumped up by former Saddam Hussein loyalists.

Ahmed Chalabi had once been courted by Washington powerbrokers. He provided the White House much of the intelligence used to justify the war against Saddam. But recently American officials had become disenchanted, accusing him of sharing intelligence with Iran, reports CBS News Correspondent Kimberly Dozier.

Both men, who were abroad, strenuously denied the charges and attacked Judge Zuhair al-Maliky, the man who signed the warrants Saturday.

"He has consistently attempted to manipulate the justice system for political purposes," Ahmad Chalabi, who was on a visit in Iran, said in a statement Monday. Al-Maliky, he said, "is not a bona fide Iraqi judge but rather an unqualified person who was put in his position by the American occupation authorities."

Al-Maliky was in court Monday and could not be immediately reached for comment. He said Sunday that the two men should be arrested and questioned. "If there is enough evidence, they will be sent to trial," he said.

Salem Chalabi said the murder charge would play into the hands of former Baathist officials, including Saddam, who is facing trial for war crimes before the tribunal.

"They can easily make allegations that this whole process is fraud because the director of the tribunal has all these charges against him. Initially I suspected that these charges were trumped up by Baathists," he told The Associated Press by telephone from London.

In Jordan on Monday, one of Saddam's lawyers called Salem Chalabi's arrest warrant "a victory" for the deposed Iraqi leader.

"We have said time and again that the court was illegal and illegitimate and now there's evidence for everyone: The court is headed by a murderer," said Ziad al-Khasawneh, one of Saddam's defense lawyers. "It's a miracle from God to help Saddam Hussein."

The warrants accused Ahmad Chalabi of counterfeiting old Iraqi dinars, which were removed from circulation after the ouster of Saddam's regime last year.

Iraqi police backed by U.S. troops found counterfeit money along with old dinars during a raid on Chalabi's house in Baghdad in May, al-Maliky said. He apparently was mixing counterfeit and real money and changing the cash into new dinars on the street, the judge said.

"I can easily prove that these charges are untrue and I intend to defend myself and clear my name," Ahmad Chalabi said in a statement.

He said he had collected the false currency as part of his role as chairman of the Governing Council's finance committee.

"It is these samples that Iraqi police found when they illegally raided our offices last May," he said. "The idea that I was involved in counterfeiting is ridiculous and the charges are being made for political purposes."

The accusation is not Ahmad Chalabi's first brush with legal problems. He is wanted in Jordan for a 1991 conviction in absentia for fraud in a banking scandal. He was sentenced to 22 years in jail, but has denied all allegations. There was no immediate reaction from the Jordanian government.

Salem Chalabi, named as a suspect in the June murder of Haithem Fadhil, director general of the finance ministry, said he'd never met the man he was accused of having threatened over a real estate dispute.

"Allegedly, what I said was: "If you don't stop investigating these properties, you won't stay in this position for long." A couple of days later he was killed," Salem Chalabi said. "I don't have any recollection of meeting him, I've never been in his office, I don't own any properties in Iraq, I stay at a friend's house. These allegations, to say the least, are ludicrous."

Salem Chalabi said he planned to file a complaint to the judicial board to investigate why the arrest warrant was made public. He wanted to return to Iraq but was afraid for his safety.

"I don't want to come back and then be put in a jail cell or a place where there's Baathists who would kill me, so I want assurances," he said. "I've spoken to (Prime Minister) Ayad Allawi and the president and they're trying to work it out. I'm waiting to hear from them, and my lawyers are going to try to get some resolution of the charges."

Allawi's office would not comment Monday and referred all questions to al-Maliky's office. Allawi is a long-time rival of Ahmed Chalabi; the two men headed rival opposition groups while in exile during Saddam's reign, Chalabi's backed by the Pentagon and Allawi's by the CIA.

Britain said Monday it would not extradite Salem Chalabi to Iraq because the two countries don't have an extradition treaty, nor has there been a request from Iraqi authorities.

In Washington, the Bush administration had no comment about the charges against the Chalabis. "This is a matter for the Iraqi authorities to resolve and they are taking steps to do so," said White House spokeswoman Suzy DeFrancis.

The warrant was the latest blow against Ahmad Chalabi, who has been pushed from the centers of power. A longtime Iraqi exile opposition leader, he had been a favorite of many in the Pentagon but fell out with the Americans in the weeks before the U.S. occupation ended in June.

He was somewhat marginalized when he was left out of the new interim government that took power June 28, but has since worked to reposition himself as a Shiite populist.

If convicted, Salem Chalabi, 41, could face the death penalty, which was restored by Iraqi officials on Sunday, al-Maliky said. His uncle, who is in his late 50s, would face a sentence determined by trial judges.

Born in Baghdad, the younger Chalabi studied at Yale, Columbia and Northwestern University and holds degrees in law and international affairs. He served as a legal adviser to the interim Iraqi Governing Council and was a member of the 10-member committee framing the basic transitional law for the new interim government.