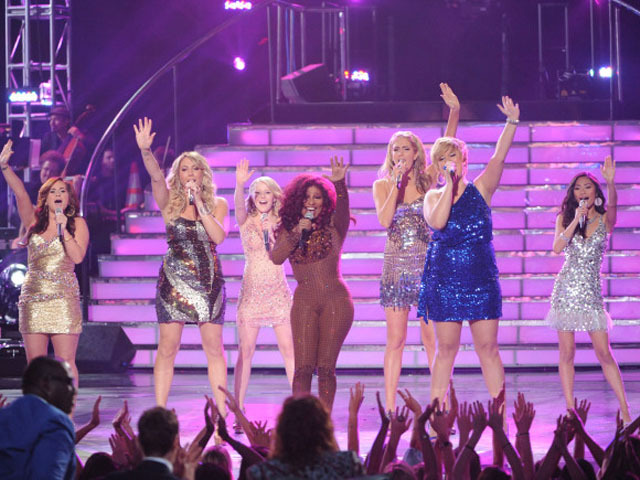 (CBS News) Neil Diamond, Reba McEntire, and Chaka Khan all took the stage Wednesday night at the red-carpet finale of the 11th season of "American Idol."

Diamond performed "Sweet Caroline" after the guys in the final 12 did a medley of "America," "Cracklin' Rosie" and "I'm a Believer." The females in the top 12 did a medley of Chaka Kahn songs with the wailing "Queen of Funk" joining them on "I'm Every Woman."

Country legend Reba McEntire joined in a duet with "Idol" fan favorite Skylar Laine to her hit "On the Radio" and Rihanna sported dreadlocks when she performed her hit single "Where Have You Been."

Fantasia, another "Idol" alum, covered Elton John's "Take Me To the Pilot" with this season's second-place runner-up, Joshua Ledet.

John Fogarty performed the Creedence Clearwater Revival hit "Have You Ever Seen the Rain," with finalist Phillip Phillips who went on to winthe "American Idol" title.

But the most buzzed about performance was by Phillips' rival Jessica Sanchez and Jennifer Holliday in a powerful duet of "And I'm Telling You (I'm Not Going)" from "Dreamgirls."

Even the judges got into the act. Steven Tyler took the stage with his band Aerosmith, and Jennifer Lopez also performed.

Tell us, which performance did you enjoy best?