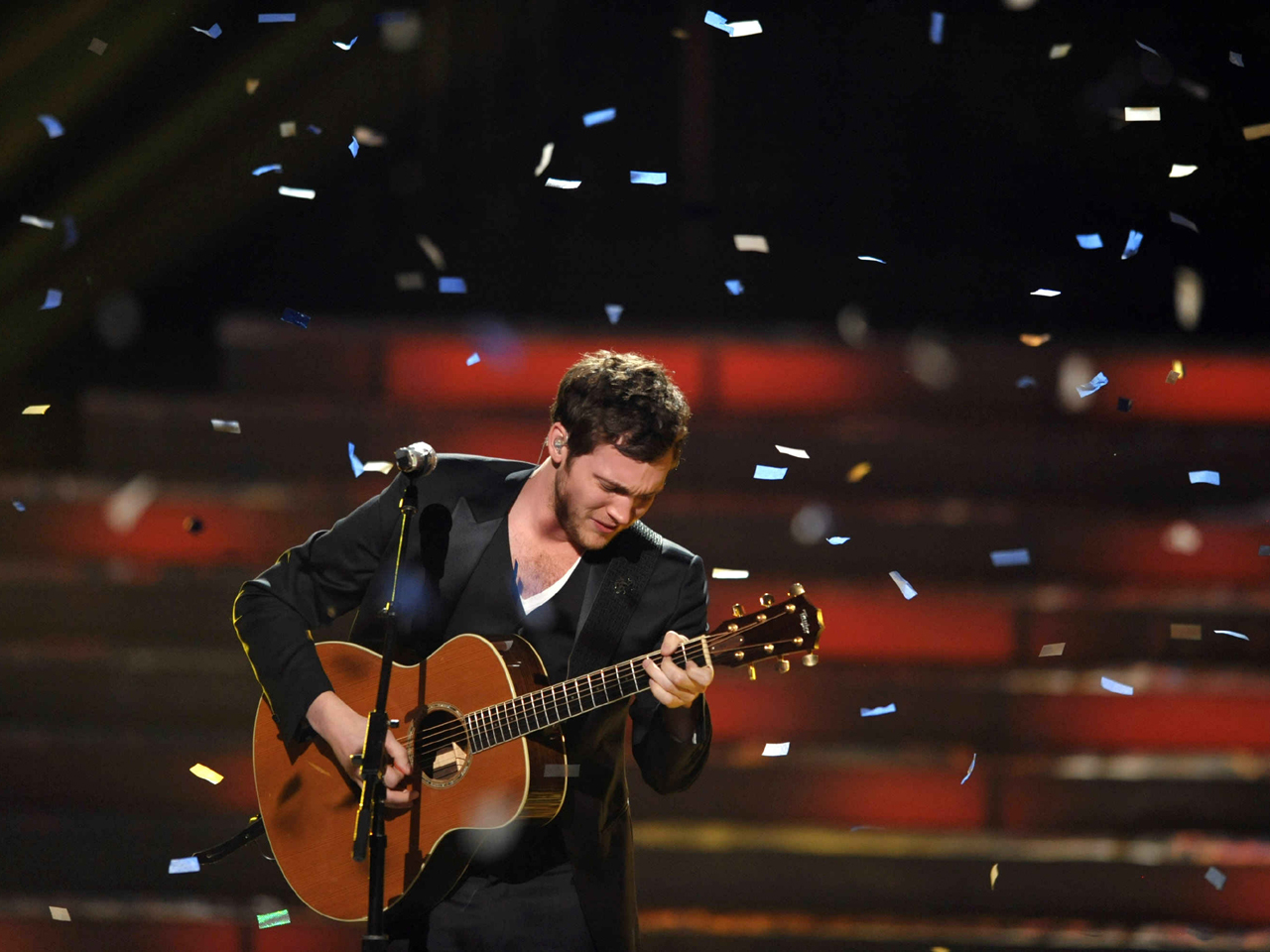 (CBS News) The Brits have coronations only when someone dies. Here in America, we need a monarch to die and a new one to live a little more often. That's why we have "American Idol."

Every year we are imbued with hope, only to discover that monarchy doesn't suit us as well as we thought it would.

This year, would it be Queen Jessica Sanchez or King Phillip Phillips? It seemed obvious, given the sort of sweet and shrieky little girls who make up the vast majority of the voting community. Only the producers could fix it otherwise. They surely chose not to.

Still, the lovely thing about the final "Idol" results show is that famous performers often turn up in order to show the young 'uns just how much they still have to learn.

But first we had to enjoy the group number to end all group numbers. Oh, if only that were possible. Joshua Ledet tried to perform the splits. Somehow, he came apart at the seams and had to be helped away by Deandre Brackensick. And that was the best part of it.

The next important question was this: What would Jennifer Lopez wear for this, perhaps her last ever night as an "Idol" judge? The answer was "one size too small." As she wandered down toward her seat, she was forced to force her little dress down toward her knees, lest her wardrobe malfunctioned in a way that even Fox could not forgive.

Ryan Seacrest, on the other hand, understood the gravity of the occasion. He wore a bow tie. With suitable seriousness, he announced that there had been 132 million votes. But how many human beings did this represent? I would like to represent that fewer than 1 million voted. Just a guess - perhaps a very liberal one.

The reverent part of the night began with Phillips accompanying John Fogerty. Dear Girls in Pink Pajamas Who Surely Voted in Droves for the Gorgeous Southerner, Fogerty used to front a band called Creedence Clearwater Revival. They were quite good. Yes, of course they're on iTunes. While Fogerty and Phillips did their thing (slightly out of mutual iTune at times), Carrie Underwood rocked in the audience.

Immediately behind her was that slightly mad actor from "Ally McBeal" and Showtime's wonderful "House of Lies." Greg Germann is his name. You see how much of a power show this is?

Soon, Mantasia himself - Ledet - was back channeling Elton John. One of his wonderfully and entirely nonsensical songs this: "Take Me to the Pilot."

Within fewer bars than you'll find on half a Manhattan block, Fantasia came out to join Mantasia. There was something more than beautiful to listen to both of them screaming to each other: "TAKE ME!!"

We then had our first glimpse of Uncle Jimmy Iovine. He has had a terrible problem for some time. He cannot remember Jennifer Lopez's name. He thinks her name is Jessica. Yes, that was it.

Chaka Khan appeared to bail the lady finalists out of one of her own songs, before we had lengthy gifts supplied by Ford.

Freshly supplied by "The X Factor," Rihanna appeared to, well, dance a lot, perhaps mime quite a bit and certainly look faintly over-produced.

The contrast was immediate. Skylar Laine took the stage, accompanied by Reba McEntire. They didn't need a thousand dancers. They didn't need a hundred drummers. A little band, a fine fiddle or two and off they went. It's what is called genuine. And Laine was very much missed in this final.

He was followed by Jennifer Lopez. Yes, that Jennifer Lopez. Oh, but wait. What was she wearing? What was this pajama suit that hung off her like the sloth that had earlier hung off Steven Tyler? (I really hadn't wanted to mention that, but clearly couldn't stop myself.) This looked like it had been created by the same designer who became famous for his work with the Teletubbies - and early-morning Vince Vaughn. It was as if Rihanna's auntie had been given a few minutes to perform.

And then the camera panned to George Clooney. No, wait, it's not that much of a power show. This was Taylor Hicks, looking suave and seated a row ahead of last year's charming runner-up, Lauren Alaina.

In more nostalgia, Seacrest revealed that Ace Young and Diana DeGarmo - "Idol" contestants of a dim and distant past - were now living together. Then Seacrest asked for the lights to be dimmed and distanced. The came up on stage. Yes, Young proposed. Was this romantic? Well, it might have been, had not he offered these words to his loved one: "With the help of David Webb Jewelry, I have a way to make this last forever."

If you don't have David Webb Jewelry, it just doesn't last. And you thought there was nothing worse than the Ford ads that have peppered this show. Oh, of course she said yes. The David Webb Jewelry brand would have been ruined forever if she hadn't.

Hollie Cavanagh had to follow this. She was given her moment in the lights to sing "You'll Never Walk Alone." This was far more genuine than might have appeared. The song is the anthem of her hometown soccer club - Liverpool. (Terrible team, sadly.) Indeed, the Liverpool supporters' version appeared on a Pink Floyd track, "Fearless." Jordin Sparks and a choir emerged to help Cavanagh. Sparks showed Cavanagh what it really means to be fearless on stage.

After a Robin Gibb tribute, Sanchez was accompanied by Jennifer Holliday in a duet of her "And I Am Telling You (I'm Not Going)." This was a little unfair. Holliday has more power than Kim Jong Un. How could Sanchez match that? She tried very, very hard. The show hasn't really been fair to her at all. She has singing talent, but performance and audience connection are a different sort of talent.

With mere minutes to go to the end of this amusingly bloated evening's power entertainment, Steven Tyler appeared on stage with Aerosmith. Of course they have a tour to sell. Did you need to ask? At the end, Tyler took his coat off. He doesn't do it with the finesse of Ledet.

One hour and 57 minutes into the show, we were treated to Sanchez and Phillips singing a duet. Given how their genres have little in common, this was difficult. It was Joe Cocker and Jennifer Warnes' "Up Where We Belong," which was about as much in Phillips' wheelhouse as a little Jay-Z. As if to symbolize this, he wore a dinner jacket.

So to the announcement. A man from Telescope - the mobile marketing company that adjudicates the alleged honesty of the process - offered a perfectly posh English accent to accentuate the probity of the judging.

"132 million votes have been generated," he said.

You might have thought votes were normally cast. But here, votes are generated, as if by machines. Which some have said they are. That is no way to speak of the mothers and CEOs of tomorrow. They might be wearing little pink nighties and pajamas right now, but just you wait.

"The winner of 'American Idol' Season 11," intoned Seacrest (cut to families of both contestants), "is Phillip Phillips."

He was asked to sing his new, very Mumford and Sons, single. Half way through, he broke down. Yes, the singing really is live. Indeed, he was so overcome that he didn't offer one more note. The background singers hummed, the drummers drummed and Phillips wept, took off his guitar and walked off the stage and over to his family.

The winner was yet another white boy with a guitar. This, in a strange way, confirms that perhaps the voting is real - in so far as every vote is counted and the vast majority are, um, generated by little girls who vote for their dreamboats.

For "Idol", though, there are rockier waters ahead than for Phillips (though he is reportedly enduring substantial health problems). The show has lost a quarter of its viewers this year. Worse, its ratings among the crucially frivolous and affluent 18-49 age group are now almost the same as those of "The Voice."

The big bosses at Fox promise changes. They claim there wasn't enough entertainment this year. But what can the show do to enhance the entertainment? Yes, they could (and should) offer new judges. But there are too many singing shows now, too many outlets for promising performers.

At the same time, the audiences are far too frivolous. What they like today, they may not like tomorrow.

This isn't like the old times - when 5-year-old Jessica Sanchez fell in love with "Idol."