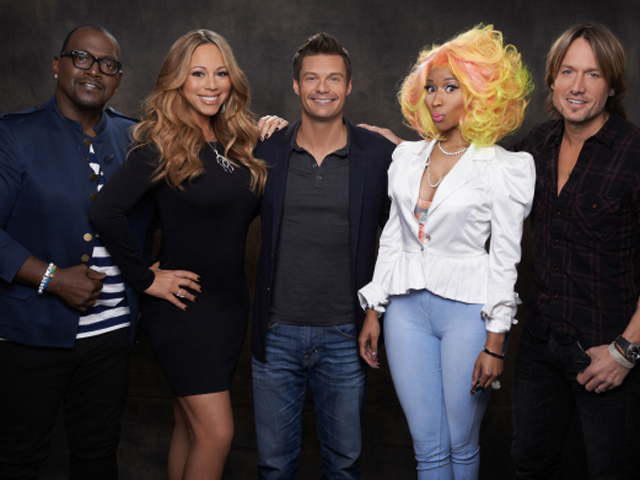 Consulting her notes, Walters recounted a phone conversation with Carey just before the ABC talk show went on the air, with new details of Tuesday's blowup between Carey and Minaj that was partly captured on video made public on the TMZ website.

Walters said Carey told her that "when Nicki walked off the set, multiple people heard Nicki say, 'If I had a gun I would shoot the (adjective unspoken by Walters) bitch.'"

After a meeting on Wednesday attended by the pair, Minaj said to Carey, "I love you, but we might fight again," according to Walters. "Mariah responded, 'No, we will not.'"

Walters said Carey told her that the singer had hired extra security. TMZ posted a photo Friday of Carey, walking with her crew, including a uniformed security person.

"Mariah said she doesn't feel comfortable emotionally," Walters reported. "But she will continue with the show because she loves the show. And she loves mentoring the contestants."

Walters issued an invitation to Minaj, a past guest of "The View," asking her to return to the show to give her side of the story.

But Minaj wasted no time responding with a string of Twitter postings.

She continued: "Ironically no camera or mic heard the gun comment tho. Lol (at) the struggle. Not even the producers believed u. Say no to violence barbz."

A bit later, she tweeted: "I don't call tmz n Barbara Walters cuz I stand on my own two feet. Never needed an army. God is good. Insecurity is as cruel as the grave."

Rumors of drama between Minaj and Carey began to swirl as soon as the new panel was officially announced on Sept. 16.

Then the blurry web video released Tuesday by TMZ.com displayed what appeared to be an argument between Minaj and Carey during the tryout taping in Charlotte, N.C. On the video, Minaj announces that she is no longer putting up with "her ... Highness," in an expletive-enhanced reference to Carey.

The gang got together for a photo shoot on Thursday, and according to TMZ, things were "peaceful." Another round of auditions begins Friday.