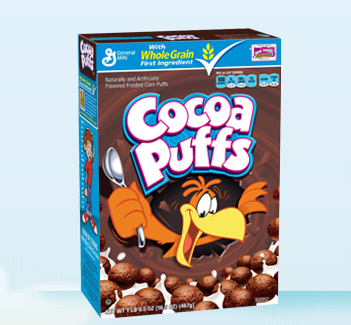 Sonny the Cuckoo Bird's stare may be making your kids "cuckoo for Cocoa Puffs."

A new study of cereal aisles at grocery stores found cereal products marketed to kids are placed half as high on shelves as cereals marketed for adults, so they can appear closer to eye level. The characters on the kids cereal boxes, such as the Trix Rabbit and Cap'n Crunch, also appeared to be looking downwards at a 9.7-degree angle, whereas characters on adult boxes looked straight ahead.

The researchers said this marketing strategy of having cartoon characters lock eyes with children may influence their connection with a brand, fostering loyalty and inspiring their interest in the products.

"There are some cool things happening in grocery stores, many based on psychology, that impact how and what people purchase," postdoctoral lab researcher Aner Ta from Cornell University's Food and Brand Lab, who co-authored the study, said in a statement.

For the study, researchers studied 65 different kinds of cereal in 10 different grocery stores in New York City and Connecticut; the boxes included a total of 86 different characters who served as company "spokes-characters." They calculated the angles of the characters' eye gaze by standing four feet from the shelves - about the standard distance shoppers would be when walking down aisles.

Of the 86 characters, 57 were marketed to children, and those were the ones that gazed downward to lock eyes on kids. For comparison, characters on adult boxes gazed upward about a .43-degree angle, which would appear to look nearly straight ahead.

The average height of the spokes-characters gaze was about 54 inches for adult cereals and 20 inches for children's cereals.

In another experiment, researchers polled 63 college-aged individuals and asked them to view a Trix box randomly shown to have the rabbit gazing straight at the viewer and the other looking down, asking them to rate their feelings of trust and connection to the brand.

They found the eye contact increased positive feelings towards the product, and made them more likely to want it.

"If you are a parent who does not want your kids to go 'cuckoo for Cocoa Puffs,' avoid taking them down the cereal aisle," said study co-author Dr. Brian Wansink, director of the Food and Brand Lab.

Dr. Susan Linn, a psychiatric instructor at Harvard Medical School and the Director of Campaign for A Commercial Free Childhood, told USA Today that parents need to take back control by setting rules for their children before they enter the grocery store.

"We aren't buying a product just because you like the character on the box," she said. "Parents can make sure walking down the cereal aisle doesn't have any surprises."

Recognizing the power that characters have in food marketing, first lady Michelle Obama announced last October that Sesame Street characters like Elmo and Big Bird could be used to advertise vegetables by produce companies free of charge.

The partnership was aimed to boost fruit and vegetable consumption among kids.

The study, "Eyes in the Aisles: Why Is Cap'n Crunch Looking Down at My Child?," was published April 2 in the Journal of Environment and Behavior.