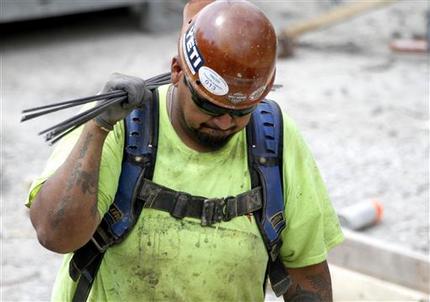 CHICAGO -- High temperatures and humidity will bake much of the central U.S. this week, making it feel as hot as 115 degrees in some places and leading some cities to open cooling stations and take other precautions.

The high pressure system, sometimes called a "heat dome," will push conditions to their hottest point so far this summer, though record hot temperatures aren't expected, according to the National Weather Service. Authorities from Minnesota to Louisiana are warning people to take precautions and check on the elderly and other vulnerable neighbors and relatives.

A four-year-old Illinois girl was hospitalized Tuesday after being found unresponsive in a hot vehicle in a suburb northwest of Chicago. Details on her condition weren't released. Investigators think the girl climbed into the vehicle without her parents' knowledge after overhearing conversations about going to her grandmother's home for dinner, the McHenry County Sheriff's Office said Wednesday.

In neighboring Missouri, officials blamed heat for the death last week of an elderly woman in St. Louis County.

Temperatures were forecast to reach the 90s for most areas of the central U.S. starting Wednesday and lasting into the weekend in some places. High humidity will make it feel anywhere from 105 to 115 degrees.

"We're not talking record-breaking heat by any stretch," said Andrew Krein, a meteorologist with the National Weather Service's Chicago-area office. "The only thing is it is the warmest it's been this summer, so in that respect people may not be prepared for it."

Excessive heat warnings put out by the weather service were in effect Wednesday for parts of Minnesota, the Dakotas, Nebraska, Iowa, Kansas, Missouri and Illinois.

Thunderstorms and a cold front descending south across Lake Michigan could provide some relief Friday for parts of the Great Lakes region.

Heat is the leading cause of weather-related deaths, ahead of flooding, Krein said.

Jerry Main, who plants corn and soybeans on about 500 acres in southeast Iowa near Fairfield, said farmers plan outdoor work in early mornings to avoid the hottest part of the day.

"As far as cutting weeds by hand or manual labor outside I would say most farmers will spend a good share of the afternoon in the house," he said.

This time of year, many Midwest farmers are spraying soybean fields to control weeds, a task likely performed from the cab of an air-conditioned tractor. Others are applying fungicide to corn, which is sometimes done by airplane.

Krein, the meteorologist, said the maturing corn crops this time of year are partly to blame for the sudden increase in humidity, along with the main source: moisture from the Gulf of Mexico.

"Corn is a very effective transporter of moisture from the ground into the atmosphere," he said, adding that that moisture is also then blown over urban areas such as Chicago.