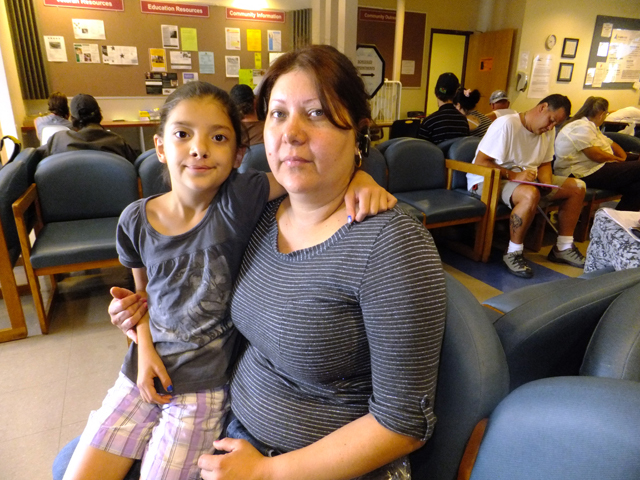 (AP) WASHINGTON - The nation's poverty rate remained stuck at a record level last year, while household income dropped and the number of people who don't have health insurance declined.

A Census Bureau report released Wednesday provided a mixed picture of the economic well-being of U.S. households for 2011 as the nation enters the final phase of a presidential election campaign in which the economy is the No. 1 issue.

The overall poverty rate stood at 15 percent, statistically unchanged from the 15.1 percent rate in the previous year. Experts had expected a rise in the poverty rate for the fourth straight year, but unemployment benefits and modest job gains helped stave that off, the bureau reported. For last year, the official poverty line was an annual income of $23,021 for a family of four.

While unemployment eased slightly from 2010 to 2011, the gap between rich and poor increased. The median, or midpoint, household income was $50,054, 1.5 percent lower than 2010 and a second straight annual decline.

In a blog post, the White House said the latest figures show that government policies can help the poor, middle class and uninsured, while more work remains to be done.

"While we have made progress digging our way out of the worst economic crisis since the Great Depression, too many families are still struggling and Congress must act on the policies President Obama has put forward to strengthen the middle class and those trying to get into it," the White House post said.

By total numbers, roughly 46.2 million people remained below the poverty line last year, unchanged from 2010. That figure was the highest in the more than half a century that records have been kept. The 15 percent poverty rate was about the same as it was in 1993 and was the highest since 1983.

Broken down by state, New Mexico had the highest share of poor people, at 22.2 percent, according to rough calculations by the Census Bureau. It was followed by Louisiana, the District of Columbia, South Carolina, Arkansas and Georgia. On the other end of the scale, New Hampshire had the lowest, at 7.6 percent.

Bruce D. Meyer, an economist at the University of Chicago, said it was disappointing that poverty levels did not improve. He described it as a sign of lingering problems in the labor market, even with recent declines in the unemployment rate. "The drop in the unemployment rate has been due in significant part to workers leaving the labor force, because they are discouraged, back in school, taking care of family or other reasons," he said.

Some economists were just relieved that the poverty level wasn't higher in the struggling economy.

"This is good news and a surprise," said Sheldon Danziger, a University of Michigan economist who closely tracks poverty. He pointed to a continuing boost from new unemployment benefits passed in 2009 that gave workers up to 99 weeks of payments after layoffs and didn't run out for many people until late 2011. Also, job gains in the private sector helped offset cuts in state and local government workers.

"It would indicate the stimulus was even more effective than believed," he said.

The official poverty level is based on a government calculation that includes only income before tax deductions. It excludes capital gains or accumulated wealth, such as home ownership.

As a result, the official poverty rate takes into account the effects of some stimulus programs passed in 2009, such as unemployment benefits, as well as jobs that were created or saved by government spending. It does not factor in noncash government aid such as tax credits and food stamps.

David Johnson, the chief of the Census Bureau's household economics division, attributed the better-than-expected poverty numbers to increases in full-time workers over the last year. He also estimated that expanded unemployment benefits helped keep 2.3 million people out of poverty, while Social Security lifted roughly 14.5 million seniors above the poverty line. Without the Social Security cash payments, the number of people ages 65 and older living in poverty would have increased five-fold.

If non-cash government aid were counted in the official formula, the earned income tax credit would have lifted another 5.7 million people above the poverty threshold, while food stamps would have boosted 3.9 million people.

On the other hand, those at the top saw more growth in their incomes. Johnson said top 1 percent of wage earners had a 6 percent increase in income in the last year, while earners in the bottom 80 percent of the income distribution mostly lost ground. The top 5 percent posted a 5.3 percent in income, indicating a widening in the gap between rich and poor.

The share of Americans without health coverage fell from 16.3 percent to 15.7 percent, or 48.6 million people. It was the biggest decline in the number of uninsured since 1999, helped in part by increased coverage for young adults under the new health care law that allows them to be covered under their parents' health insurance until age 26.

The number of people covered by employment-based health plans also edged up from 169.4 million to 170.1 million, the first time in 10 years that the rate of private insurance coverage did not fall. Meanwhile, government health insurance including Medicaid, Medicare and the Children's Health Insurance Program increased for the fifth consecutive year, adding coverage to more than three million people.

Congress passed the health overhaul in 2010 to bring coverage to more people. The law is a favorite target of Republicans, including Romney, who has pledged to push a repeal if he is elected. The main provisions of the health care law don't take effect until 2014.

Those with a low income include Claudia Pedroza, 39, of Lakewood, Colo., who moved her four children from Denver to outside the city five years ago in search of better schools and a bigger house. She struggled to find work busing tables at a restaurant for $4.64 an hour, bringing home just $500 a month after taxes. Her husband has a $9-an-hour job construction but has seen his hours cut to 30 hours a week because of the limp market.

Waiting for free food, shampoo and toiletries in a government-service agency this summer, Pedroza said it's been a challenge to stay afloat.

"I thought it was going to be easy, but it's been very hard," said Pedroza, speaking in Spanish translated by her youngest daughter, age 8. Pedroza's daughter, Karla Osorio, picked up a pint of strawberries available at the government office and excitedly put them in their bag to take home. Pedroza and her daughter had a brief conversation.

"Mom says to tell you we went to Wal-Mart ... and couldn't afford this stuff. Here, look, we have grapes and strawberries," Osorio said.