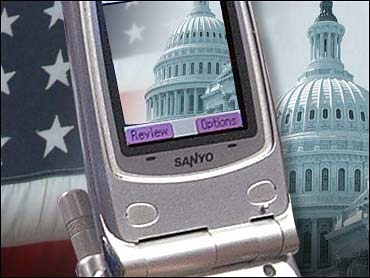 Wish you could make a quick mid-flight call to get a ride from the airport? Or do you hate the idea of being surrounded by chatty cellphone conversations on an airplane? Now is your chance to speak up.

The Federal Communications Commission has decided to seek comments from the public about ending the ban on the in-flight use of cellphones, CBS News Correspondent

"I travel a lot on business, I travel every week, and to be in communication with the office is vital," said passenger Art Swanberg.

In a meeting today in which regulators voted unanimously to allow airlines to provide Internet access to their passengers, officials said they'll be weighing the demand for cellphone use against some passengers' desire for a quiet cabin.

But he won't be calling from the air anytime soon, according to Orr. While the FCC may think cell phones on planes make sense, the Federal Aviation Administration has serious safety questions.

CBS News Radio Correspondent Lou Miliano reports that the FCC has approved a comprehensive study of cellphone interference with cockpit instruments in all airplanes before lifting the ban is seriously considered. The results aren't due until 2006.

CBS Tech Analyst Larry Magid notes that neither laptops accessing the Internet nor a cell phone on airplanes communicate directly with the ground. The airplane would have to be equipped with its own satellite system that relays the calls or Internet connections to ground stations.

"Anytime passengers use this sort of two-way radio technology, it raises communication and safety issues with both the FCC and the FAA,'' said Magid.

"Today we live in an increasingly mobile world and Americans are demanding greater access to wireless services and applications," FCC chairman Michael Powell said. "We are pushing the frontiers in order to bring the information age to all corners of the world."

It's not clear how soon the cellphone ban could be lifted.