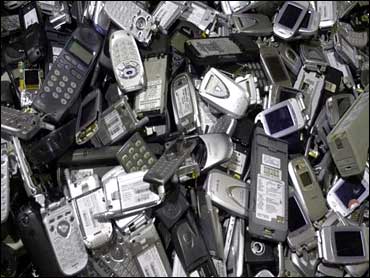 If predictions hold true, millions of cell phones will be cast aside starting in late November because of a new rule allowing people to keep their phone numbers when switching cellular carriers.

Though many of those phones will find a dusty home in a cluttered desk drawer, millions could wind up in landfills, leaking toxic metals and chemicals into the ground.

The rule that takes effect Nov. 24 allows users to change wireless companies without losing their phone numbers, and is expected to motivate as many as 30 million people to switch within the first year.

Those who do will need to buy new phones. That's because even carriers that use the same network technologies employ different encryption.

So what will become of all those old phones?

Much like computers, even relatively new cell phones have little resale value. Judging from current auction listings on eBay, those determined enough to sell a used phone can expect to bring in as little as $5 per handset.

"If you were to call and talk to 10 people, you'd probably find that two-thirds of those people have handsets sitting idle in their garages," said Eric Forster, vice president of marketing and sales for ReCellular Inc., a Dexter, Mich., company that refurbishes or recycles old handsets collected by cell phone carriers.

The good news, Forster said, is that "people know they probably shouldn't throw it away" because it may harm the environment. "But they're not sure, so they keep it."

Many old phones get refurbished or recycled under donation programs that help charities, but it's a tiny fraction of the 100 million or so handsets that are already "retired" each year in this country, according to a new estimate from the environmental research group Inform Inc.

And even those phones that are refurbished raise environmental concerns because they still may eventually end up in the garbage, especially if sold in poorer nations with no recycling programs — as the majority of refurbished phones are.

While the industry has just launched an initiative to publicize recycling, existing efforts by individual wireless companies with collection boxes in their stores have so far met with only modest success.

Of the phones received by ReCellular, which also buys old handsets, about 75 or 80 percent are refurbished at an average cost of $20 per handset and then resold for about $45 or $50. Part of those proceeds often go to charities.

Those phones that can't be salvaged are sold for between 50 cents and $1.25 per pound to recycling companies that extract toxic materials for either reuse or safe disposal.

Most of the toxic substances in cell phones are contained in the circuit board, the liquid crystal display of the screen, and the battery.

But while efforts to recover those substances are intensifying in the United States and Europe, recycling programs are much more primitive in poorer nations — where three-quarters of ReCellular's handsets are expected to be sold next year.

"Exporting waste is not the way to resolve waste problems," said Eric Most, director of the solid waste prevention program at Inform. "We need to work with industry to change the design of phones to make them more reusable and recyclable and less toxic."