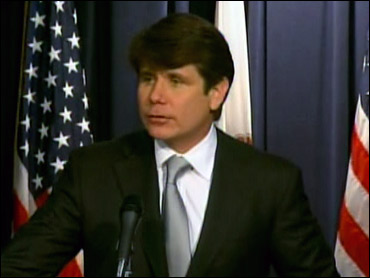 Former Major League slugger Darryl Stawberry took himself out of the game Sunday night on "The Celebrity Apprentice," leaving Donald Trump with little choice but to say "You're fired."

When the men's team took another loss and Olympian Michael Johnson found himself on the firing line, Strawberry stepped up to the plate and volunteered to go. Trump told him only two others had done that before and both later had regretted it.

Strawberry left without earning any money for his charity- a group that aids autism patients.

When Johnson, who was project manager for the men's team, complained about Strawberry's action, Trump told him to get out before he changed his mind about whom to fire.

Bret Michaels appears to be again disrupting the team, but some of his suggestions were worth considering. Ditto for former Illinois Gov. Rod Blogojevich, who asked Johnson to consider another spokesperson for their project and was quickly squelched.

Blogojevich continues to provide entertainment. This week, viewers learned that he could not use a computer. Trump's explanation for why the indicted public official couldn't speak candidly about his fellow teammates was priceless: Blogojevich can't badmouth one of the celebs on his team, lest fans of that celeb turn up on his jury.

Meanwhile the governor continue to proclaim his innocence to everyone he meets.

On the winning women's team, the divisive member appears to Cyndi Lauper. The singer's feelings were hurt when Olympian Summer Sanders, the project manager who earned $20,000 for her charity, passed over her in favor of Sharon Osbourne as celebrity spokesperson. Sanders later compounded the problem with comments she made in the board room.

Neither side produced what the sponsors wanted, but the arresting images in the woman's brochure won the approval of execs from the two companies. The execs said the women could have provided a little more copy, especially a phone number for ordering the product. But they faulted the men for too much copy, a poor choice of fceleb spokesman and photrographs that failed to draw in the consumer.