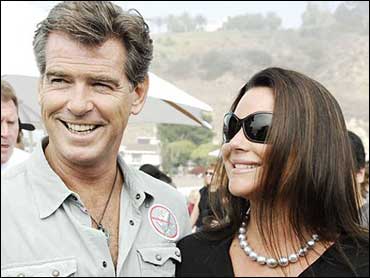 Some of Malibu's celebrity residents gathered on the beach Sunday to protest a proposed natural gas facility.

Actor and environmentalists Pierce Brosnan and his wife, Keely Shaye Smith, Halle Berry and Cindy Crawford were just a few of the celebrities that joined surfers to protest Australian-based BHP Billiton's plan to build a natural gas facility 14 miles off the Malibu coast.

Others at the "Paddle Out Protest" included actors Jane Seymour and her husband James Keach, Dick Van Dyke, Tea Leoni and Daryl Hannah — who hit the waves on her pink surfboard.

BHP Billiton wants to build the Cabrillo Port Liquefied Natural Gas facility off the coast of both Malibu and Oxnard. There are currently five terminals proposed for California, three are planned along the Southern California coastline.

Opponents say the terminals don't meet clean air requirements and could in the future be terrorist targets. A decision on the matter is expected some time next year.