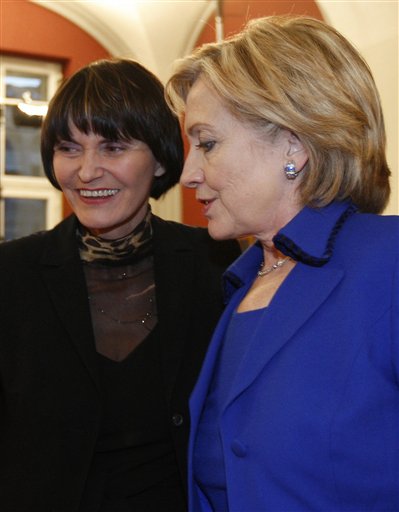 Thousands of supporters of President Hugo Chavez took to the streets Thursday to protest a 53-day-old strike intended to topple their leader and to celebrate the 45th anniversary of the fall of Venezuela's last dictator.

"Chavez! Chavez!" chanted demonstrators at a bus terminal in southwestern Caracas, one of two gathering points for marches that were to converge in a central avenue of the capital. They also gathered at a park on the east side, setting off earthshaking fireworks called Bin Ladens.

Chavez needs the show of support.

The strike, called Dec. 2 to demand that he resign or call early elections, has dramatically reduced oil production in the world's fifth largest exporter. It also has caused the bolivar to lose 25 percent of its value this year as Venezuelans and investors sell the currency to buy dollars amid the uncertainty.

In a speech broadcast late Wednesday, Chavez announced he would impose foreign exchange controls to protect the bolivar. The policy will set limits starting next week on the amount of dollars or other foreign currencies Venezuelans can accumulate. Earlier Wednesday, the central bank suspended foreign currency trading for a week as political and economic uncertainty fed a surge in demand for dollars.

"The people went out to defend democracy 45 years ago," said lawmaker Nicolas Maduro, a leader of Chavez's Fifth Rebublic party. "Today, they are in the streets telling the world that the majority of the people support President Chavez."

Maduro was surrounded by people wearing red bandanas that read "Chavez" and waving small blue copies of Venezuela's constitution, which the president pushed through in 1999 as a cornerstone of his self-described "revolution" to help the poor.

Strike leader Carlos Ortega, president of the nation's largest labor union, accused Chavez's supporters of planning a violent rampage in the capital. He urged government adversaries "to stay at home" to avoid "a massacre."

"With their Nazi-fascist ideology, they have a racist view of the people, a delinquent people," he said. "This is a dignified and decent people."

Six people have died during protests since the strike began, including a man killed Monday during clashes between Chavez foes and followers. About 2,000 National Guard troops and police patrolled Caracas on Thursday.

The marches marked the downfall of Gen. Marcos Perez Jimenez, who was deposed on Jan. 23, 1958, after a decade of iron-fisted rule. Four decades of democratic governments followed — but "chavistas" believe Chavez, who was elected in 1998 and re-elected in 2000, is the first president to stand up for the interests of Venezuela's poor majority.

Opponents accuse Chavez, who led a failed coup in 1992, of running roughshod over democratic institutions and wrecking the economy with leftist policies.

Thursday's march came after a day of disappointment for the opposition.

On Wednesday, Venezuela's Supreme Court indefinitely postponed a Feb. 2 referendum that would have asked citizens whether Chavez should resign.

The court's decision came just 11 days before the scheduled vote and stunned the opposition, which hoped the plebiscite would prompt the embattled leader to quit. Government opponents presented the elections council with over 2 million signatures in November to convoke the referendum.

"It's a slap in the face for millions of Venezuelans who are waiting for a solution to the crisis," said opposition leader Rafael Alfonzo.

Chavez called the ruling "fair," adding that "it eliminates the terrible uncertainty that was affecting the country."

Justices ruled that no national vote — a referendum or election
can be held until it decides whether elections council member Leonardo Pizani, who helped organize the referendum, is eligible to serve on the panel.

Pizani had resigned from the council in 2000, only to rejoin last November. He insisted he could rejoin because Congress, by law, had failed to formally accept his resignation.

Members of Chavez's ruling party filed suit arguing that Pizani's absence from the council made his resignation legally binding.

Meanwhile, the "Group of Friends of Venezuela," a forum of six nations supporting OAS-mediated negotiations to end Venezuela's crisis, prepared for a first meeting.

Diplomats from Brazil, Chile, Mexico, Portugal, Spain and the United States are to meet at the Organization of American States in Washington on Friday. Cesar Gaviria, secretary-general of the OAS, began a mediating mission over two months ago.

Chavez has welcomed the "Friends" initiative, but he warned on Wednesday that Venezuela would not accept foreign interference in domestic affairs.