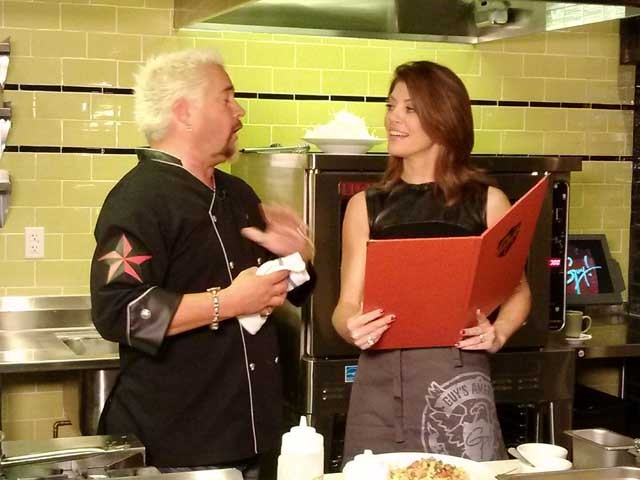 (CBS News) Food TV phenom Guy Fieri has taken the celebrity chef genre to new heights. The cowboy-booted, tattooed host of The Food Network's "Diners, Drive-Ins, and Dives" spoke with CBS This Morning's Norah O'Donnell about the show, his career, and about taking on the New York City culinary scene.

"These mom and pop joints are what build our young chefs, are what keep our communities fed, are what probably are one of the last socially engaging environments that we have in our communities," Fieri said, passionately speaking to the importance of the diners, drive-ins, and dives he visits across the country.

His latest venture and eighth restaurant, Guy's American Kitchen & Bar, recently opened in Manhattan's Times Square.The restaurant boasts 500 seats and Fieri calls it "mind-blowing," but critics have come down hard on the restaurant.

The chef defends his style and told O'Donnell, "I know what I make, I know how I cook, I know the success of my food."

"You can't have eight restaurants and be doing it wrong, or that wrong," he added.

Fieri says he has always loved food and his entrepreneurial sense took hold at an early age. When he was ten-years-old, he managed his own pretzel cart and dubbed it "The Awesome Pretzel Cart."

Years later, his friends and wife convinced him to audition for a new reality show, "The Next Food Network Star." Fieri won and has gone on to host nine shows and land tenth on the Forbes Wealthiest Chef list.

For more from the no-holds-barred Fieri on his career, food, and to see him and Norah O'Donnell in the kitchen, watch the video above.