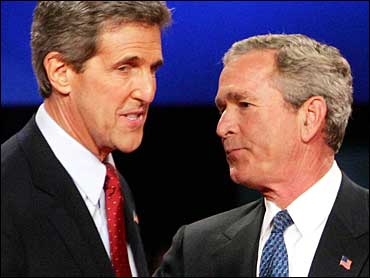 
Sen. John Kerry's debate performance appears to have returned the presidential campaign to a dead heat and eroded some of President Bush's advantages on national security issues, according to a new CBS News/New York Times poll.

Kerry's performance helped boost the Democratic ticket five points to a 47-47 percent tie with the Bush/Cheney team, erasing a lead that the Republicans held for a month. One percent of likely voters surveyed backed Ralph Nader.

The poll also points to substantial worries on U.S. policy in Iraq — a linchpin issue for both candidates — but widespread doubt that either man has a plan to deal with the continuing violence there.

The five-point boost to Kerry/Edwards is slightly greater than the bounce the Republicans enjoyed from their convention in late August and early September.

Kerry campaign operatives had predicted a jump: in the "spin room" in Miami on Thursday, adviser Tad Devine told reporters: "Expect this race to be really close in a very short time."

The Democrat's campaign even unveiled an ad that trumpeted, "George Bush lost the debate."

The Bush campaign, meanwhile, has implied that the debate was a draw, firing off press releases with quotes from columnists supporting the idea. Rather than insist their man won, Bush spinners attacked Kerry for allegedly continuing to change position on key issues.

The poll of 979 adults, among them 851 registered voters, was conducted by telephone from Oct. 1-3 and has a three-point margin of error.

Two other recent polls also show the race to be tight. A Newsweek magazine survey showed Kerry with 47 percent to 45 percent for the president, compared with two polls from last month that showed Mr. Bush in the lead by several percentage points.

And the latest CNN-USA Today-Gallup poll shows Mr. Bush and Kerry even
at 49 percent each. The group's late September poll had given the president
a lead of 52 percent to 44 percent for Kerry.

The snapshot of opinion with less than a month to go until Election Day comes with one vice-presidential debate and two presidential debates still ahead, and with the national horserace giving way to contests in a handful of battleground states.

It also comes with the caveat that Al Gore was seen to win the first debate in 2000, only to slip in the polls soon thereafter.

And the numbers reveal that 24 percent of voters still support Mr. Bush despite thinking he did not win the debate.

But the results were still a boon to the Kerry camp, especially the improvement in the Democrat's favorability ratings. Gore's likeability rating, by contrast, slipped after the first debate four years ago.

Before Thursday's debate, 32 percent of registered voters viewed Kerry favorably and 44 percent unfavorably. After the Miami meeting, his favorability mark improved by 8 points to 40 percent, and his unfavorable edged down to 41 percent.

By contrast, Gore's favorable/unfavorable ratings did not improve in 2000 (Gore's numbers actually slipped slightly, although the drop was within the margin of error).

In other categories, Mr. Bush retains a clear advantage, but Kerry has made up ground:

Those meetings are likely to focus on a broader range of issues. The first debate was mostly about Iraq, an issue closely tied to each candidate's base of support: Eighty percent of people who support the war back Mr. Bush, and 85 of those who oppose it support Kerry.

Overall, registered voters are split on whether the invasion of Iraq was the right thing to do, with 49 percent saying it was correct and 47 percent disagreeing.

The president's approval rating was virtually unchanged after the debate and stands at 47 percent. The share of Americans who believe the country is on the wrong track ticked up from 51 percent before the debate to 54 percent afterwards.

Not all the numbers are good news for Kerry: 56 percent think the Bush administration has made the United States safer from terrorism. And neither Mr. Bush not Kerry is seen by a majority of voters as having a clear plan for dealing with Iraq.

And while most voters feel Mr. Bush has made it clear what he wants to accomplish, a majority feels Kerry has failed to do the same.