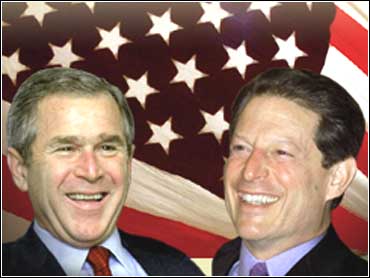 The presidential contest between Republican George W. Bush and Democrat Al Gore is getting closer. In a two-way contest, 43 percent of registered voters interviewed in the latest CBS News poll say they will vote for Bush, 41 percent for Gore. By comparison, Bush led Gore 47 percent to 39 percent in mid-May.

Bush has a lead among independents, and right now is holding on to more of the Republican base than Gore claims of his Democratic base. In fact, 89 percent of Republicans are now supporting Bush, compared with the 77 percent of Democrats who currently support Gore.

There is a gender gap, with women favoring Gore and men voting for Bush. There are also age differences. Bush does well with younger voters (though this group tends to be the least likely to go to the polls on Election Day). When those who say they "lean" towards a candidate are included, Bush leads Gore 46 percent to 43 percent. Bush's supporters are generally paying somewhat more attention to the campaign than Gore's are (though only 26 percent of all registered voters are paying "a lot" of attention).

When candidates from the Reform Party and the Green Party, Pat Buchanan and Ralph Nader, are added to the major party candidates the horserace changes little, although Bush's lead widens slightly. With all four candidates, Bush receives 42 percent and Gore gets 37 percent, while Nader and Buchanan are the choices of 4 percent each.

But while Bush is generally viewed favorably and Gore gets mixed ratings from the voters, both Nader and Buchanan are seen negatively by most of those with an opinion about them. And in the case of Nader, most people have no opinion of him at all.

HOW ENTHUSIASTIC ARE THE VOTERS?

Bush's voters are not only more likely to be paying attention to the campaign, but they are also marginally more likely to be enthusiastic about their choice. At the same time, however, many of both Bush and Gore’s supporters have reservations about their candidate or are only supporting him because he is the party's nominee. Thirty-six percent of Bush's voters say they're enthusiastic about him, compared with 30 percent of Gore's voters. Twenty-eight percent of Gore's voters and 18 percent of Bush's say they're supporting their candidate only because he will be the party's nominee.

Whatever their degree of enthusiasm, about two-thirds of each candidate's voters don't think their minds could change before the election.