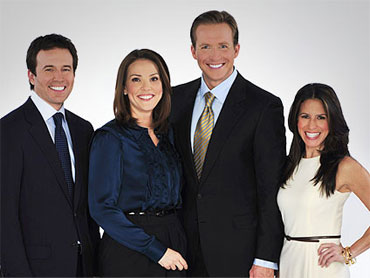 Big changes are coming to "The Early Show" next year.

Starting Jan. 3, Erica Hill and Chris Wragge will be the new co-anchors of CBS News' morning program. Jeff Glor will serve as the broadcast's news anchor.

"'The Early Show' is an important element of CBS News," McManus said in a statement. "We constantly focus on how to improve the broadcast, and we think we have a terrific combination in Erica, Chris, Jeff and Marysol. In the year since David has taken the helm, he has produced some outstanding programming and shown a deep, thoughtful understanding of morning television. This new team brings vibrancy, intelligence and warmth that I think America will grow to love."

"Erica, Chris, Jeff and Marysol are four accomplished broadcasters who already have proven track records and loyal followings. Together, they're going to be even stronger," Friedman added. "This group is the perfect combination of intelligence and personality for morning television, and I'm excited to give viewers the opportunity to welcome them into their homes each morning."

The current cast of "The Early Show" - Harry Smith, Maggie Rodriguez and Dave Price - will remain at the network in new roles, according to the statement.

Smith will become the primary substitute anchor on the "CBS Evening News," "Face the Nation" and "Sunday Morning," while continuing to report major stories for all CBS News broadcasts.

The network is discussing ongoing roles for Rodriguez and Price.

"We appreciate Harry, Maggie and Dave's countless contributions to 'The Early Show' and are looking forward to the contributions they each will continue to make at CBS News," McManus said.