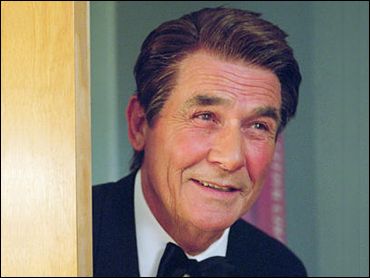 Mounting pressure and criticism from conservatives has prompted CBS to dump "The Reagans," the network's prime-time miniseries on former President Ronald Reagan.

CBS said in a statement it had decided to move the production to cable TV's Showtime network after concluding that the miniseries "does not present a balanced portrayal of the Reagans for CBS and its audience. Subsequent edits that we considered did not address those concerns."

CBS and Showtime are both owned by Viacom.

"The Reagans" had been scheduled to air on Nov. 16 and 18. November is a ratings sweeps month of special importance to TV networks since it helps to determine how much they may charge advertisers.

The decision was made amid a growing chorus of criticism, but CBS said it had not been influenced by outside pressure.

"This decision is based solely on our reaction to seeing the final film, not the controversy that erupted around a draft of the script," the network said.

Of particular concern to conservatives was a scene in which Reagan says of gays with AIDS: "They that live in sin shall die in sin."

Reagan made no such public remark, and foes of the miniseries say the line reflects liberal bias against the two-term president, who is revered by many Republicans.

The fact that Reagan is being portrayed by actor James Brolin, the husband of liberal activist Barbra Streisand, did nothing to ease conservative apprehension about the biopic.

"A free broadcast network, available to all over the public airwaves, has different standards than media the public must pay to view. We do, however, recognize and respect the filmmakers' right to have their voice heard and their film seen. As such, we have reached an agreement to license the exhibition rights for the film to Showtime, a subscriber-based, pay-cable network. We believe this is a solution that benefits everyone involved," CBS said in a statement.

Gillespie said CBS should review the miniseries for historical accuracy, or the network should run a disclaimer that the program is fiction.

"This was not an easy decision to make. CBS does tackle controversial subjects and provide tough assessments of prominent historical figures and events, as we did with films such as 'Jesus,' '9-11' and 'Hitler.' We will continue to do so in the future," CBS said.

The New York Times, citing unidentified people close to the production of "The Reagans," reported that CBS executives had previously reviewed the script and viewed the miniseries without raising any objections to the content.

The decision to pull the series sparked the same polarized response as the biopic itself, reports CBS News Correspondent Jerry Bowen.

"I don't know that misinforming fewer viewers on Showtime solves the problem,'' said Jim Dyke with the Republican National Committee.

James Brolin, who plays Reagan, wasn't talking. But his agent was. "We live in a very repressive era where they can censor soemthing before we even see it,'' said Jeff Wald.

Some analysts contend the conservative pressure is part of the nation's on-going culture war:

"There's a well organized conservative moment in this country that's in charge of its version of the truth. And they swing a big bat,'' said Martin Kaplan with the USC Annenberg School.