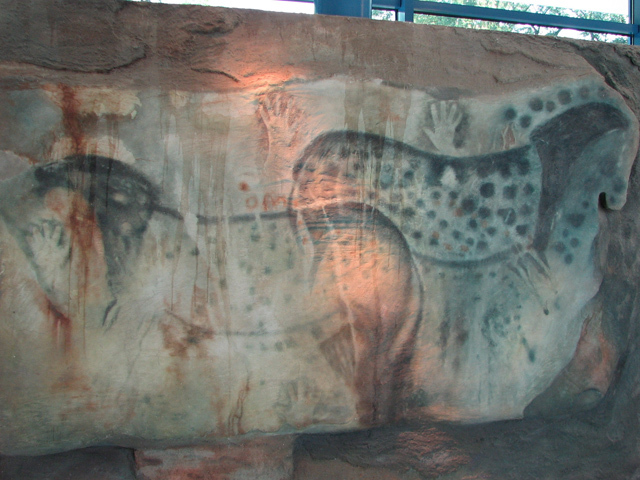 Ancient cave paintings that seemed to depict make-believe white-spotted horses might have been drawn from real life, scientists now find.

The cave paintings of the Stone Age are not only among the oldest drawings made by humans, but also serve as evidence of our growing capabilities. Scientists hotly debate how realistic these paintings are -- discovering this fact could reveal whether ancient humans tended more toward accuracy or creativity.

The approximately 25,000-year-old paintings "The Dappled Horses of Pech-Merle" depict spotted horses on the walls of a cave in France remarkably similar to a pattern known as "leopard" in modern horses such as Appaloosas. Horses were popular among Stone Age artists, found in most cave paintings that have recognizable animals in them, commonly in a caricature form that slightly exaggerates the most typical "horsey" features, such as their manes of hair.

Until now, ancient DNA analyses suggested horses during the Stone Age were only black or bay colored with no evidence for white-spotted patterns. This hinted that cave paintings of leopard-patterned horses were fantasy, not accurate portrayals. Some have proposed that drawings of imaginary animals might have had some kind of symbolic or even religious value.

Research now suggests those paintings might actually have been based on the real-life appearance of the animals.

Scientists investigated the differences in genes for coat color of 31 ancient horse fossils from Siberia, Eastern and Western Europe and the Iberian Peninsula. The researchers found that a genetic mutation associated with the presence of white leopard-like spotting patterns on modern horses was present in six of the European horse fossils. Additionally, seven of the fossils had the genetic variation for black coat color, whereas 18 had bay coats.

As such, all the horse colors seen in these drawings have now been found to exist in prehistoric horse populations. The findings suggest that cave paintings of horses may be more realistic and less symbolic or fantastic than supposed. Still, although these horses might not have been imaginary, "we cannot exclude that these horses had a religious value," researcher Arne Ludwig, an evolutionary geneticist at the Leibniz Institute for Zoo and Wildlife Research in Berlin, told LiveScience.

Leopard-spotted patterns in modern horses are sometimes linked with congenital problems such as stationary night blindness, perhaps explaining why any wild horses with them eventually died out long ago. As to why so many other horse fossils were found with them in the first place, perhaps this patterning provided camouflage in the snowy environments of the Stone Age, was attractive to mates or just stuck around due to random chance.

The scientists detailed their findings online today (Nov. 7) in the Proceedings of the National Academy of Sciences.