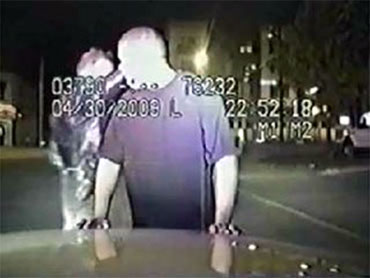 (WCCO/Minneapolis Police Dept.)
MINNEAPOLIS (WCCO) The FBI will be reviewing dash cam video of a Minneapolis police officer using a Taser on a man as a possible civil rights violation, according to a statement released by the Minneapolis police chief Tuesday evening.

Chief Tim Dolan said the Minneapolis City Attorney will also review the case for possible criminal charges against the officer.

On April 30, 2009, Rolando Ruiz was arrested near the Minneapolis 2nd Precinct near Central Avenue.

In the video, you can't see what happens before Ruiz is told to put his hands on the hood, but what's causing the complaint is what comes next in the video.

"(The officer) takes that Taser and puts it to the back of his neck and shocks him until he's incapacitated, on the ground, slumped before the squad car," said Albert Goins Sr., an attorney.

"It's clear that the only purpose for that officer's conduct was to inflict pain and inflict agony on Mr. Ruiz," said Goins.

The police officer who tasered Ruiz is Todd Lappegaard. Lappegaard was involved and reprimanded once before for using deadly force.

Back in March 2002, Lappegaard was involved in a deadly chase. The SUV he was chasing ran off the road and hit a jogger. The jogger died at the scene.

Ruiz is suing the city and asking for $75,000. He also wants Lappegaard to be reprimanded.

Mylan Masson, the director of Criminal Justice and Law Center for Minneapolis Community and Technical College, has trained police officers for more than 15 years.

"If you're looking at (the video) right now, to an untrained eye ... there could be something. Why did they (use a Taser on) him at that point, seems like he's submissive," said Masson. "What happened before? Obviously having his hands there he's not doing anything to anyone. What did he do before and how did he act before?"

Goins said Chief Dolan's request to have the FBI investigate what happened that night is just the first step in getting justice for his client.

"I think that what the chief should do now as a second step is to call for a special prosecutor in this case, "said Goins.

According to the criminal complaint, Lappegaard saw Ruiz throwing a brick through the windshield of an officer's personal vehicle outside the second precinct building on Central Avenue.

Ruiz appeared to be surrendering to Lapegaard when he was Tasered.

Goins said his client's case is more than just what appears on the video.

"It's an entire culture that you see is those officers. You see a person writhing in pain on the ground and you smile, look down and turn and nonchalantly walk away, " Goins said.

Goins said he and his client also want due process for Officer Lappegaard.

On Wednesday morning, the office of newly re-elected Minneapolis Mayor R.T. Rybak said he "takes incidents like this very seriously." The statement added Rybak "knows that Chief Dolan has a record of taking tough disciplinary action against officers when our high standards are not being met."

WHAT DO YOU THINK? Did the officer go to far or was the Tasered man out of line?