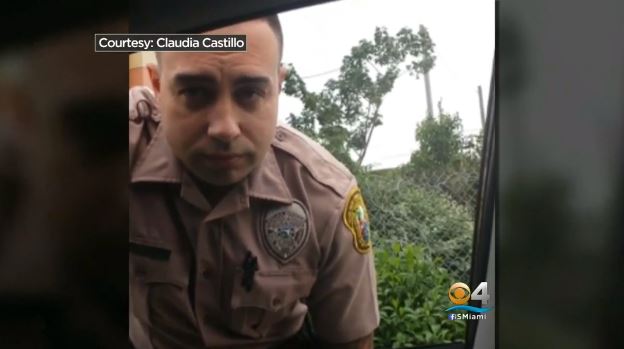 MIAMI -- Police officers are usually the ones pulling over speeding drivers but the tables turned in Miami after a woman stopped an officer for speeding, recording it all on video.

"I've been following an officer since Miller," narrated Claudia Castillo as her cell phone recorded moving traffic from her car's dashboard.

Castillo followed the Miami-Dade Police officer Friday afternoon. She told CBS Miami he blew past her going east on Miller Drive, which has a 40 mile-an-hour speed limit.

She followed him on the 826 northbound, then the 836 eastbound. Castillo eventually caught up to the MDPD officer as they approached I-95 in downtown Miami. That's where she finally got the officer's attention and they pulled over on the exit ramp to N.W. 8th Street.

Suddenly the familiar, stern questions were being asked at the car window. Only, the officer wasn't the one asking them.

"The reason why I pulled you over today... I just wanted to know, what's the emergency," asked Castillo.

"I don't know how fast I was going. But I can tell you this, I'm on my way to work right now. I don't believe I was speeding," the officer replied as he stood at Castillo's passenger-side window.

"I thought you had some kind of emergency, is everything fine?" he asked her, explaining why he stopped when she flagged him down.

The officer was apologetic, saying, "I'll be sure to slow down then."

Castillo spoke to CBS Miami about the video.

"The cop drove past me so fast my car shook," Castillo said. "And I got upset. I started speeding up and I stopped at 80."

"He's been driving wrecklessly," Castillo said. "He was going about 100 miles-an-hour 'cause I was hitting 80 and I could not catch up to him."

Since posting the video online, Castillo said many people have left both supportive and negative comments. Some were offensive and insulting, calling her names and telling her to get a life. Others applauded her actions and thanked her for holding the officer accountable.

"The Miami-Dade Police Department will have the officer's immediate command staff investigate the matter, once the officer and citizen are identified. The appropriate course of action will be taken at that point."

"I'm sure he's a nice guy but nobody's above the law," Castillo is heard on the video as she pulled right behind the police patrol unit on the exit ramp.