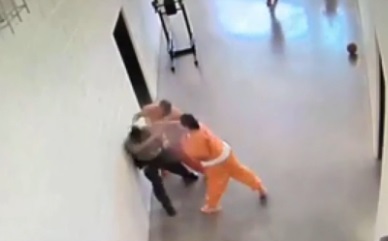 PINAL COUNTY, Arizona -- An officer at the Pinal County Sheriff's Adult Detention Center in Arizona was violently attacked by two inmates on Sunday, and it was all caught on camera, CBS affiliate KOLD reported.

According to Pinal County Sheriff Paul Babeu, the inmates planned the attack while the officer was making routine security checks.

When the officer stepped into a common recreation area of the cell block, both men followed him and began punching him in the face and body, KOLD reported.

The officer fought back while a second officer ran over to help. The second officer used a rubber-coated data collection wand to fight off the inmates.

"This calculated and violent attack on our detention officer is a stark reminder that the job they do is dangerous and a very necessary public safety function in the county," Babeu said in a press release. "I'm very proud of how our detention staff handled this incident. They defended themselves and controlled a violent situation."

The inmates have been identified as 32-year-old Ismael Martinez and 35-year-old Fabian Mendivil. Martinez was awaiting trial on burglary charges. He was taken to a hospital for a head injury, but is now back in PCSO custody.

Mendivil was transferred to the PCSO Jail for court on July 27.