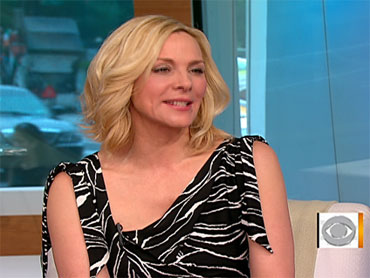 In the film, Cattrall's character says, "I am leading the way through the menopause maze with my vitamins, my melatonin sleep patches, my biodentical estrogen cream, progesterone cream, a touch of testosterone."

Cattrall's Samantha responds, "I am. I've tricked my body into thinking it's younger."

Jones said on "The Early Show," "It was very difficult to make menopause funny and sexy. But hopefully we've achieved that."

"Early Show" co-anchor Maggie Rodriguez told Cattrall, "Usually you only hear the negative stories of women going through it."

Cattrall added, "Or it doesn't have a name. They say the woman is going through 'the change,' she's having mood swings, oh, scary. But here I think we've really handled it, like we did the cancer episode for Samantha, as well, in a completely different way. I think with intelligence and humor. And I think people will go for the ride."

To show menopause doesn't have to stand in a woman's way, Samantha meets a few men in the film.

But what about Cattrall? Has she met the man of her dreams yet?

Click on the video below for all the secrets of the "Sex and the City 2" Morocco filming and Cattrall's personal love life.