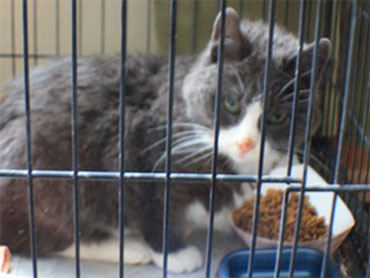 In the midst of the weekend's prolonged winter storm, Norfolk Animal Control Officer Hilary Cohen was driving through the snow, responding to a call about a cat.

Cohen tells CBS Station WBZ Boston that the small gray and white cat appeared dead. She was stiff, showing no signs of life. "I kept her in the blanket and put her on my lap in the cruiser and headed to the hospital. Once in the car, I turned the heaters on and saw a whisker twitch. That was the real only sign of reflex I saw from her."

Cohen took the frozen feline to Acorn Animal Hospital, where veterinarians were ready to apply heat therapy and administer IV fluids, among other things. Cohen says the staff there "worked miracles on this little cat."

Days later, the cat is showing strong signs of recovery. The feline is walking, eating and drinking, which is why Cohen is trying to find the cat's owners. "She is very affectionate so (it) was definitely someone's pet and not a feral cat."

Animal control tells WBZ's Peg Rusoni that the cat's owners recognized the now-thawed cat as their own and will soon be reunited with their furry friend.

Local Video from WBZ in Boston
View CBS News In