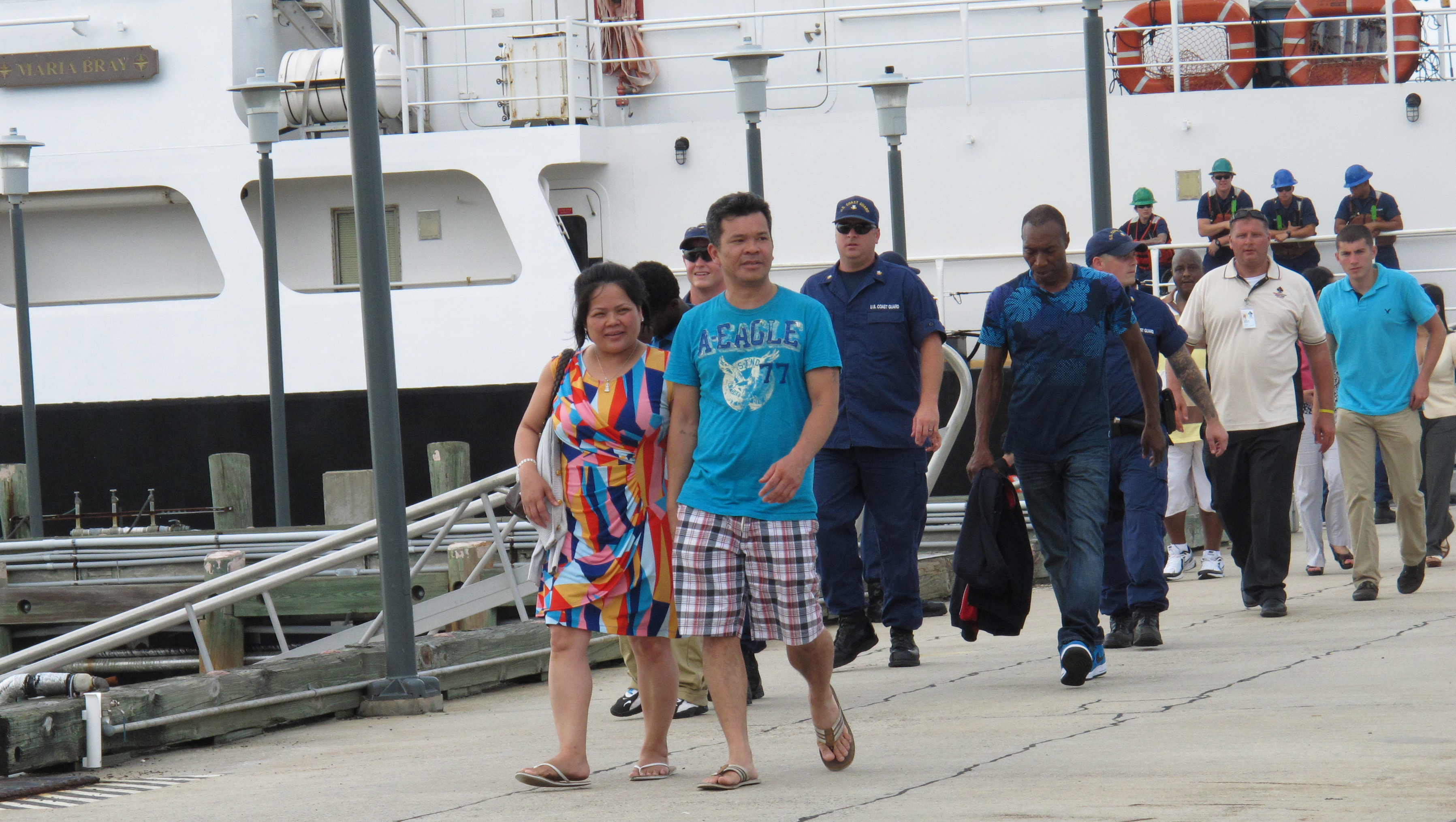 TYBEE ISLAND, Ga. - After 16 hours stuck at sea, passengers stranded on a casino boat that ran aground off Georgia's coast were ferried to shore Wednesday aboard two Coast Guard cutters.

About 94 of The Escapade's 96 passengers and 27 crew members arrived at the dock shortly after 4 p.m., nearly a full day after the boat left for the maiden voyage of its operator's new Savannah service Tuesday night. A second cutter carrying 20 more people arrived shortly afterward. Four people were ferried ashore by helicopter.

Passengers walked slowly off the boat and down the dock to dry land, several of them rubbing their eyes after a five-hour cruise turned into an overnight affair.

"There was a lack of sleep but they kept us entertained," said Bernard Yount of nearby Springfield, Georgia. "I don't really think anybody was scared. I didn't see anybody panic. A few people were maybe worried about kids being home or animals being in the house."

The crew gave passengers sodas and water - no alcohol - to drink and fed them hotdogs late at night. On Wednesday morning, they were served bacon and eggs, said passenger Michael Alcott of Savannah. The ship's generator kept the lights on and the air conditioning going.

"The AC was blowing cold. They had food," said Alcott, 39. He said people slept on the floor using life jackets as pillows.

Both Alcott and passenger Dina Cook of Savannah said they felt the ship strike something at 9:30 p.m., but passengers weren't notified they had run aground until after midnight. The Coast Guard said it was notified about midnight that the ship was stuck.

"It was nerve-wracking, the fact that we were not being told anything," Cook said.

Initial attempts to tow the boat failed when the tow lines broke, so those aboard were transferred first to small boats that hold about eight people, then to the two larger vessels, Petty Officer 1st Class Lauren Jorgensen said.

Tara Sinclair, waiting at the Savannah dock for her mother, 66-year-old passenger Veronica Heyward, said her mom told her passengers had to "jump from the big boat to the little boat and then climb a rope ladder" onto the cutter. "She called it a 'Fear Factor' moment," Sinclair said.

Jorgensen said the area where the boat was stranded was too shallow for the Coast Guard boats to pull alongside it.

The casino boat was not impeding ships sailing to and from the Port of Savannah, said Robert Morris, a spokesman for the Georgia Ports Authority.

The 174-foot-long Escapade was still stranded about 1.8 miles off the north end of Tybee Island, a popular beach destination east of Savannah, in the Calibogue Sound near Hilton Head, South Carolina, the Coast Guard said.

The Escapade's crew initially reported to the Coast Guard that the ship had a malfunction of its chart plotter, part of the navigation system, Jorgenson told The Associated Press. But she said the Coast Guard hadn't been able to confirm any malfunction yet.

The Escapade is a casino ship operated by Florida-based Tradewinds Casino Cruise. The company's Facebook page said that Tuesday night was to be the maiden voyage for its Savannah cruise service and passengers were invited to board for free.

Tradewinds Casino Cruise did not immediately respond to phone messages left at the company's Savannah office and its headquarters in Madeira Beach, Florida.

The casino boat's first Savannah cruise was scheduled to run from 7 p.m. Tuesday until 12:30 a.m. Wednesday, according to the company's website. It describes the vessel as a three-story ship capable of carrying 500 passengers. It's outfitted with slot machines, poker and blackjack tables and a roulette wheel.

Alcott said he felt the ship jolt when it ran aground about 9:30 Tuesday night. He said passengers continued to gamble for about three hours until they were told that they were stuck.

He and Cook both said the ship was listing at a sharp angle that forced people to walk leaning to one side, which Cook said left her with swollen ankles.

As she headed toward the buses that were shuttling passengers to their cars, Cook said she was ready for the experience to be over.