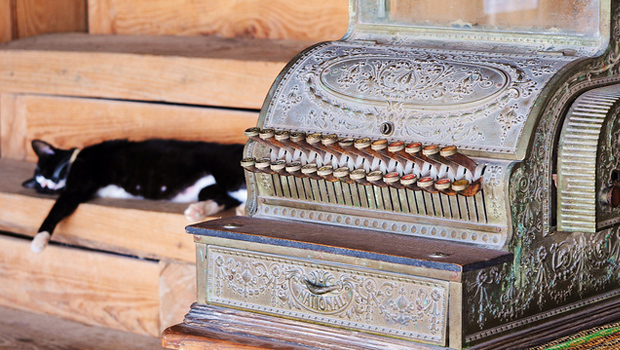 NEW YORK Ka-ching! The cash register may be on its final sale.

Stores across the country are ditching the old-fashioned, clunky machines and having salespeople - and even shoppers themselves - ring up sales on smartphones and tablet computers.

Barneys New York, a luxury retailer, this year plans to use iPads or iPod Touch devices for credit and debit card purchases in seven of its nearly two dozen regular-price stores. Urban Outfitters, a teen clothing chain, ordered its last traditional register last fall and plans to go completely mobile one day. And Wal-Mart, the world's largest retailer, is testing a "Scan & Go" app that lets customers scan their items as they shop.

That the cash register is getting the boot is no surprise. The writing has been on the wall for a long time for the iconic machine, which was created in the late 1800s. The register was essential in nearly every retail location by 1915, but it now seems outdated in a world in which smartphones and tablets increasingly are replacing everything from books to ATMs to cameras.

Stores like smartphones and tablets because they take up less floor space than registers and free up cashiers to help customers instead of being tethered to one spot. They also are cheaper: For instance, Apple's (AAPL) iPads with accessories like credit card readers can cost a store $1,500, compared with $4,000 for a register. And Americans increasingly want the same speedy service in physical stores that they get from shopping online.

"Consumers want the retailer to bring the register to them," said Lori Schafer, executive adviser at SAS Institute, which creates software for major retailers.

J.C. Penney (JCP), a mid-price department-store chain, said the response by customers has been great since it started rolling out iPod Touch devices late last year in its 1,100 stores. The goal is to have one in the hands of every salesperson by May. The company said that about a quarter of purchases at its stores nationwide now come from an iPod Touch. ks

On a recent Thursday afternoon at a Penney store in the Manhattan borough of New York City, Debbie Guastella, 55, marveled after a saleswoman rang up three shirts she was buying on an iPod Touch.

"I think it's great," said Guastella, who lives in Huntington, N.Y. "The faster the better."

It's been a long fall for the cash register, which innovated retail as we know it. The first register was invented following the Civil War by a little known saloon owner. Before then, most store owners were in the dark about whether or not they were making a profit, and many suffered since it was easy for sales clerks to steal from the cash drawer unnoticed. But by 1915, cash registers were ubiquitous in stores across the country, with more than 1.5 million sold by then.

More recently, stores have been looking for ways to modernize checkout. Since 2003, self-checkout areas that enable customers to scan and bag their own merchandise have become commonplace in grocery and other stores. But recently, there's been a push to go further.

As a result, companies that make traditional cash registers are racing to come up with new solutions. NCR (NCR), formerly known as the National Cash Register, was the first to manufacturer the cash register on a large scale.

Last year, the company that also makes ATMS, self-service checkout machines and airport check-in kiosks, launched a program that merges its software with the iPad. This allows store clerks to detach the iPad from the keyboard at the counter and use it as a mobile checkout device

Stores themselves also are taking their cues from the success of Apple. The nation's most profitable retailer moved to mobile checkout in all of its stores in 2007. In 2011, Apple began allowing shoppers to check out their purchases using their iPhones.

Take upscale handbag maker Coach (COH), which is using iPod Touch devices at half of its 189 factory outlet stores. The company also is testing them in a handful of its 350 regular stores.

The move has enabled Coach to start slimming down its registers to the size of small podiums, freeing up space on walls to build shelves to showcase more product, said Francine Della Badia, Coach's executive vice president of merchandising.

Della Badia, who says the additional space will be used for new shoe salons and other purposes, said most importantly, the mobile devices allow store staff to build "a more intimate connection with the customer."

Some retailers have decided to go completely mobile. Urban Outfitters (URBN), which operates more than 400 stores under its namesake brand, Anthropologie and Free People, announced in late September that all sales eventually will be rung up on iPods and iPads on swivels located at counters. The company didn't give a timeframe for when it would go completely mobile.

Urban Outfitters had given iPod Touch devices to its sales staff two years ago and the move has been very well received by shoppers, said Calvin Hollinger, the company's chief information officer in his address to investors.

Nordstrom (JWN), an upscale department-store chain that's considered within the retail industry to be the gold standard in customer service, also plans to get rid of registers altogether.

The company handed out iPod Touch devices to its staff at its 117 department stores nationwide in 2011. And by late last year, it did the same for its 110 Nordstrom Rack stores that sell lower-priced merchandise. Nordstrom, which already has removed some of the registers at its Rack stores, said it aims to phase out registers by next year.

Colin Johnson, a Nordstrom spokeswoman, said it's too early to draw any conclusions on how mobile checkout has influenced buying, but the company is learning about which technologies work best.

"We see the future as essentially mobile," Johnson said. "We don't see departments in our store as being defined by a big clunky cash register."

Not every retailer is quick to ditch registers, though. After all, there are still logistics to figure out. For instance, most retailers don't accept cash payments on mobile devices. But if they start to do so, where will they put the cash that would normally go into a register?

Additionally, sales staff walking around stores armed with mobile devices could turn off shoppers who would prefer to be left alone in aisles. Richard Robins, a 67-year-old semi-retired investment fund manager from Redonda Beach, Calif., says he would like the convenience of mobile checkout but wouldn't want to be pressured from a sales clerk while he's in the aisle.

To guard against making customers uncomfortable, some retailers including Penney are training their salespeople on when to approach shoppers - and when not to. For its part, Wal-Mart (WMT) is putting checkout in the hands of the shoppers themselves.

The retailer is testing its "Scan & Go" app, which can be used on Apple devices such as iPads, in more than 200 of its more than 4,000 stores nationwide.

"Our goal is to give choices to all of our customers however they want to shop," said Gibu Thomas, senior vice president of mobile and digital initiatives at Wal-Mart's global e-commerce division."