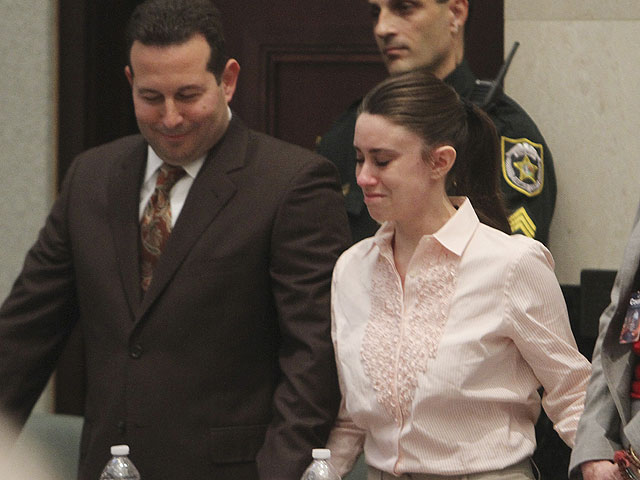 ORLANDO, Fla. - Jurors aren't talking. Prosecutors are stunned that they lost. Defense attorneys are lashing out at the media. And Casey Anthony could be free by the weekend.

A case that involved years of forensic investigation, weeks of often highly technical testimony and untold hours of media analysis turned out to be a quick decision for the jurors weighing whether Anthony killed her toddler daughter. Early in their second day of deliberations, the 12 men and women concluded Tuesday the 25-year-old lied to investigators but wasn't guilty in her child's death.

Now Anthony waits to learn if she could spend her first night out of jail in almost three years since she was first accused in the case. She was only convicted of four misdemeanor counts of lying to investigators, and it's possible that Judge Belvin Perry could sentence her Thursday to time already served for those crimes. The four counts of lying to sheriff's deputies each carry a maximum sentence of one year.

Anthony has been in jail since her October 2008 arrest on first-degree murder charges. She avoided a possible death sentence thanks to her acquittal on the murder count. The case began in July 2008 when Caylee Anthony was reported missing.

"I'm very happy for Casey, ecstatic for her and I want her to be able to grieve and grow and somehow get her life back together," defense attorney Jose Baez said Tuesday. "I think this case is a perfect example of why the death penalty does not work ... Murder is not right, no matter who does it."

The trial became a national sensation on cable TV, with its CSI-style testimony about duct-tape marks on the child's face and the smell of death inside a car trunk.

After a month and a half of testimony, the jury took less than 11 hours to find Anthony not guilty of first-degree murder, aggravated manslaughter and aggravated child abuse.

Tears welled in Anthony's eyes, her face reddened, her lips trembled, and she began breathing heavily as she listened to the verdict.

Anthony's parents, George and Cindy Anthony, left court quickly after the verdict without hugging or saying anything to their daughter. Their attorney, Mark Lippman, told ABC's "Good Morning America" on Wednesday that they hadn't spoken with their daughter since the verdict. Lippman wouldn't answer whether the Anthonys believe their daughter killed Caylee.

Jurors declined to talk to reporters after their decision, but an alternate juror said the prosecution wasn't able to establish whether Caylee's death was murder as opposed to an accident.

"They didn't show us how Caylee died, and that was important," Russell Huekler said. "No one could answer that."

Huekler also told NBC's "Today" that he didn't think prosecutors provided a motive for why Anthony would kill her daughter.

"Just because Casey was a party girl did not show why she would possibly kill Caylee," he said.

Also on NBC, prosecutor Jeff Ashton said the verdict left him and other prosecutors in shock.

"I think I mouthed the word 'wow' about five times," he said.

Many in the crowd of about 500 people outside the courthouse Tuesday reacted with anger after the verdict was read, chanting, "Justice for Caylee!" One man yelled, "Baby killer!"

Given the relative speed with which the jury came back with a verdict, many court-watchers were expecting Anthony to be convicted in the killing, and they were stunned by the outcome.

Prosecutors contended that Anthony — a single mother living with her parents — suffocated Caylee with duct tape because she wanted to be free to hit the nightclubs and spend time with her boyfriend.

Defense attorneys argued that the little girl accidentally drowned in the family swimming pool and that Anthony panicked and hid the body because of the traumatic effects of being sexually abused by her father.

The case played out on national television almost from the moment Caylee was reported missing three years ago. CNN's Nancy Grace dissected the case at every turn with the zeal of the prosecutor she once was, arguing that Anthony was responsible for her daughter's death. The TV host turned the term "tot mom" into shorthand for Anthony.

Anthony's attorney Cheney Mason blasted the media after the verdict.

"Well, I hope that this is a lesson to those of you having indulged in media assassination for three years, bias, prejudice and incompetent talking heads saying what would be and how to be," Mason said.

"I'm disgusted by some of the lawyers that have done this, and I can tell you that my colleagues from coast to coast and border to border have condemned this whole process of lawyers getting on television and talking about cases that they don't know a damn thing about."

The jurors — seven women and five men — would not talk to the media, and their identities were kept secret by the court.

State's Attorney Lawson Lamar said: "We're disappointed in the verdict today because we know the facts and we've put in absolutely every piece of evidence that existed." The prosecutor lamented the lack of hard evidence, saying, "This is a dry-bones case. Very, very difficult to prove. The delay in recovering little Caylee's remains worked to our considerable disadvantage."

Caylee's disappearance went unreported by her own mother for a month. The child's decomposed body was eventually found in the woods near her grandparents' home six months after she was last seen. A medical examiner was never able to establish how she died.

The case became a macabre tourist attraction in Orlando. People camped outside for seats in the courtroom, and scuffles broke out among those desperate to watch the drama unfold.

Because the case got so much media attention in Orlando, jurors were brought in from the Tampa Bay area and sequestered for the entire trial, during which they listened to more than 33 days of testimony and looked at 400 pieces of evidence. Anthony did not take the stand.

"While we're happy for Casey, there are no winners in this case," Baez said after the verdict. "Caylee has passed on far, far too soon and what my driving force has been for the last three years has been always to make sure that there has been justice for Caylee and Casey because Casey did not murder Caylee. It's that simple. And today our system of justice has not dishonored her memory by a false conviction."

In closing arguments, prosecutor Linda Drane Burdick showed the jury two side-by-side images. One showed Anthony smiling and partying in a nightclub during the first month Caylee was missing. The other was the tattoo Anthony she got a day before law enforcement learned of the child's disappearance: the Italian words for "beautiful life."

"At the end of this case, all you have to ask yourself is whose life was better without Caylee?" Burdick asked. "This is your answer."

Prosecutors also focused heavily on an odor in the trunk of Anthony's car, which forensics experts said was consistent with the smell of human decay.

But the defense argued that the air analysis could not be duplicated, that no one could prove a stain found in the trunk was caused by Caylee's remains, and that maggots in the compartment had come from a bag of trash.

Prosecutors hammered away at the lies Anthony told when the child was missing: She told her parents that she couldn't produce Caylee because the girl was with a nanny named Zanny — a woman who doesn't exist; that she and her daughter were spending time with a rich boyfriend who doesn't exist; and that Zanny had been hospitalized after an out-of-town traffic crash and that they were spending time with her.

Baez said during closing arguments that the prosecutors' case was so weak they tried to portray Anthony as "a lying, no-good slut" and that their forensic evidence was based on a "fantasy." He said Caylee's death was "an accident that snowballed out of control."

He contended that the toddler drowned and when Anthony panicked, her father, a former police officer, decided to make the death look like a murder by putting duct tape on the girl's mouth and dumping the body in the woods a quarter-mile away. Anthony's father denied both the cover-up and abuse claims.

The verdict could divide people for many years to come, just as the O.J. Simpson case in the mid-1990s did, with some believing Anthony got away with murder.

Ti McLeod, who lives near the Anthony family, said, "The justice system has failed Caylee." Jodie Ickes, who lives a mile away and goes to the same hairdresser Anthony uses, said she is against the death penalty and was glad that Casey wasn't facing execution. "I'm comfortable with the outcome," she concluded.

Among the trial spectators was 51-year-old Robin Wilkie, who said she has spent $3,000 on hotels and food since arriving June 10 from Lake Minnetonka, Minn. She tallied more than 100 hours standing in line to wait for tickets and got into the courtroom 15 times to see Anthony.

"True crime has become a unique genre of entertainment," Wilkie said. "Her stories are so extreme and fantastic, it's hard to believe they're true, but that's what engrosses people. This case has sex, lies and videotapes — just like on reality TV."