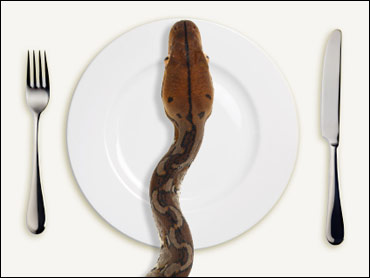 The case of the severed snake head in a dish of a broccoli at an upstate New York restaurant may go unsolved.

A diner said he found the snake head on May 3 while eating at a T.G.I. Friday's in Clifton Park, north of Albany.

Textbook designer Jack Pendleton of Ballston Lake told CBS affiliate WRGB that the snake head was about the size of his thumb and it was mixed in with his vegetables. He said he thought at first it was a mushroom.

"The eye sockets were sunken in and black and rotted," says Pendleton, "and there were bits of skin missing from the forehead - I could see the skull plate through that, and there was tissue, bits of spine coming out the back."

Laboratory tests showed the head hadn't been cooked, indicating it was added to the broccoli at the restaurant. The Carrollton, Texas-based company asked New York State Police to investigate.

State police say they can't determine how the snake wound up in the dish and that the investigation has been closed.

The statute of limitations is five years. So if someone comes forward with evidence within that time, charges could still be filed.