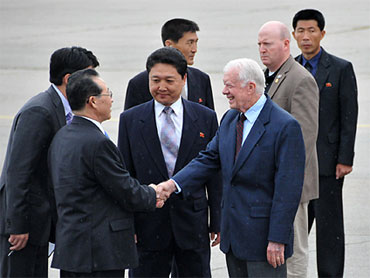 A young North Korean girl with a red scarf tied around her neck handed Carter flowers and saluted him after he landed at the Pyongyang airport in an unmarked plane, footage aired by TV news agency APTN showed. Carter blew her a kiss before getting into a black stretch Mercedes-Benz, according to APTN.

The rare journey to win the release of 31-year-old Aijalon Gomes of Boston comes a year after another ex-U.S. president, Bill Clinton, traveled to North Korea on a private mission to bring home two American journalists also sentenced to prison for sneaking into the country illegally. A fourth American was set free earlier this year after 40 days in custody.

As with Clinton's visit, reclusive North Korea is expected to portray Carter's trip — coming at a time of heightened tensions over its nuclear ambitions and the March sinking of a South Korean warship blamed on Pyongyang — as a diplomatic victory.

It was unclear whether Carter's trip would include a visit with North Korean leader Kim Jong Il, but the statesman shared a warm handshake with the regime's No. 2 official, Kim Yong Nam, before they sat down for talks Wednesday, APTN said.

The talks were "cordial," the state-run Korean Central News Agency reported from Pyongyang.

Senior U.S. officials in Washington confirmed Monday that Carter would be traveling to North Korea to bring back Gomes but stressed that Carter was not representing the U.S. government but was on a private mission.

North Korea had agreed to release Gomes, who was believed to be in ailing health, to Carter if the ex-president paid a visit, a senior U.S. official told The Associated Press in Washington. Carter was expected to spend one night in North Korea and return home with Gomes on Thursday, a second U.S. official said.

Both spoke on condition of anonymity because of the sensitivity of the situation.

The Korean peninsula remains in a state of war because the 1950-53 Korean conflict ended in with an armistice, not a peace treaty.

Washington does not have diplomatic relations with Pyongyang, and the U.S. military stations 28,500 troops in South Korea to protect the longtime ally. However, North Korea has made it clear it wants normalized relations with the U.S. and a peace treaty. It cites the U.S. military presence on Korean soil as a key reason behind its bid to build nuclear weapons.

Carter has visited the communist nation before. The 85-year-old statesman made a historic trip to North Korea in 1994 when Clinton was president — and met with then-leader Kim Il Sung — on a visit that led to a landmark disarmament deal on the Pyongyang's nuclear weapons program.

That deal alleviated tensions but fell apart in 2002 after the U.S. accused North Korea of having a secret uranium enrichment program. New, six-nation disarmament talks were launched in 2003, but Pyongyang walked away from the process last year.

Gomes, an English teacher from Boston who had been working in South Korea, was sentenced by North Korea in April to eight years of hard labor and fined the equivalent of $700,000 for crossing into the North illegally and committing an unspecified "hostile act."

It remains unclear why Gomes crossed into North Korea. Gomes is described by friends in Seoul as a devout Christian and by those who knew him at Bowdoin College in Maine as passionate and opinionated. He had joined rallies in Seoul in support of Robert Park, a fellow Christian who deliberately crossed into North Korea from China last December to call attention to the country's human rights record.

Park was expelled from North Korea about 40 days later.

U.S. officials have pressed for Gomes' release on humanitarian grounds, citing his health and reports that Gomes attempted suicide while in custody. State Department officials made a quiet trip to North Korea in early August but did not succeed in securing Gomes' release.

His family is hoping the North Korean government will grant him amnesty and allow him to return home, spokeswoman for the family, Thaleia Schlesinger, said in Boston.

"They certainly continue to be grateful to the government of North Korea for the care he was given the last couple of months since his suicide attempt," she said Wednesday.

The pleas for his release come amid a standoff over the sinking of the South Korean warship that killed 46 sailors. Seoul and Washington blame Pyongyang for the incident; North Korea denies involvement.

U.S. State Department spokesman P.J. Crowley said in Washington that he would not comment on Carter's trip.

"We do not want to jeopardize the prospects for Mr. Gomes to be returned home by discussing any details related to private humanitarian efforts to get him released and back here safely to the United States," Crowley told reporters Tuesday.
By Associated Press Writer Hyung-Jin Kim. Matthew Lee in Washington and David Sharp in Bowdoin, Maine, contributed to this report