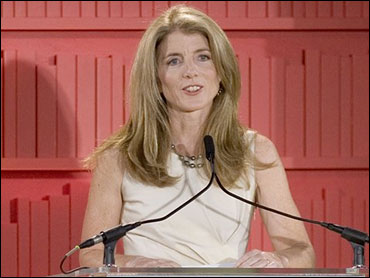 Barack Obama pivoted quickly to the general election campaign for the White House on Wednesday, naming a three-person team including Caroline Kennedy to lead his search for a running mate while expressing confidence that the Democratic Party would soon unify after a bruising battle for the presidential nomination.

"I'm very confident of how we're going to be able to bring the party together," Obama said after a brief conversation with Hillary Rodham Clinton, his vanquished rival.

Obama clinched the Democratic nomination on Tuesday, taking a major step toward his goal of becoming the first black president. While Clinton has yet to concede defeat, she and associates have been maneuvering for the past 24 hours to gain her a place on the ticket.

Bob Johnson, the founder of the Black Entertainment Network, was among them, and said he was doing so with her blessing.

Johnson said he had written the Congressional Black Caucus asking its members to urge Obama to place Clinton on the ticket.

Clinton "didn't direct me to do it but she certainly knows what I'm doing," said Johnson, who angered Obama's aides earlier in the race when he obliquely referred to Obama's confessed drug use as a young man.

Furthermore, CBS News chief political consultant Marc Ambinder reported last night that Clinton's campaign manager Maggie Williams a few weeks ago quietly endorsed an effort by two former Clinton staffers to launch a draft unity ticket called "VoteBoth".
But former president Jimmy Carter has come out against those efforts. Mr. Carter told the UK's Guardian newspaper that an Obama/Clinton ticket "would be the worst mistake that could be made." (Read more about groups pushing to put Clinton on the ticket.)

Two senators swung behind Obama after remaining neutral throughout his long nominating battle with Clinton, as did Rep. Rahm Emanuel, D-Ill., a member of the House leadership with close ties to Obama and Clinton.

"We have a nominee of our party," said Sen. Tom Harkin of Iowa. Sen. Ken Salazar of Colorado also announced his endorsement.

Former Vice President Walter Mondale, who had been a Clinton supporter, announced he was backing Obama.

It hardly mattered in terms of delegate math - after months of struggle, Obama had more than enough to prevail at the party convention in Denver in August.

But Mondale, Harkin, Salazar and others poised to endorse Obama later in the day were also sending a message to Clinton that her race is over, whether she will admit it or not.