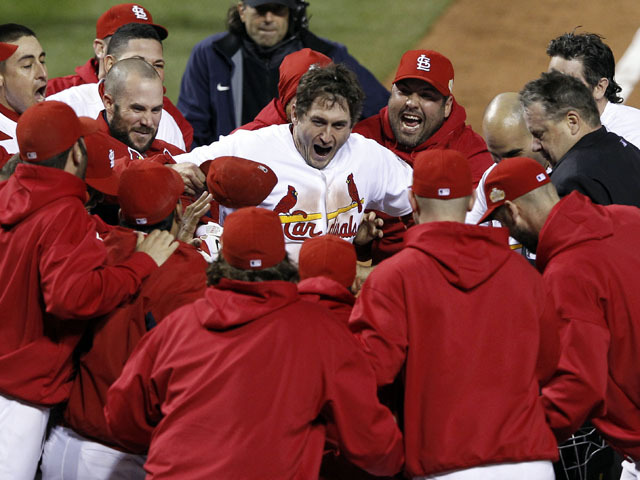 ST. LOUIS - Twice down to their last strike, the St. Louis Cardinals kept rallying to win one of baseball's greatest thrillers.

David Freese completed a startling night of comebacks with a home run leading off the bottom of the 11th inning to beat Texas 10-9 on Thursday night, and suddenly fans all over got something they have waited forever to see: Game 7 in the World Series.

"Man that was incredible," Freese said. "But we fought back, we made some mistakes early on, but the way the Cardinals and we've all have been playing lately, you expect to come back like this. This is just a good feeling and I'm pumped were playing tomorrow.

"Just an incredible feeling, seeing all my teammates at the dish waiting for me."

Freese, the hometown boy who made good, had already written himself into St. Louis lore in Game 6 with a two-strike, two-out, two-run triple in the ninth off Rangers closer Neftali Feliz that made it 7-all.

"Initially I was like `Are you kidding me? My first AB off Feliz in this situation ever,"' Freese said. "I just beared down, got a pitch to hit. Initially I thought I hit it pretty good, I thought (right fielder Nelson Cruz) was going to grab it, so just a lot of emotions on that one."

After banged-up Josh Hamilton hit a two-run homer in the Texas 10th, St. Louis again tied it when Lance Berkman hit a two-out single on a 2-2 pitch from Scott Feldman.

Busch Stadium was still in frenzy when Freese opened the 11th with a leadoff shot over the center field wall off Mark Lowe. Freese thrust his arm in the air as he rounded first base, and the crowd was delirious.

Next up on Friday night, the first Game 7 in the World Series since the Angels beat San Francisco in 2002.