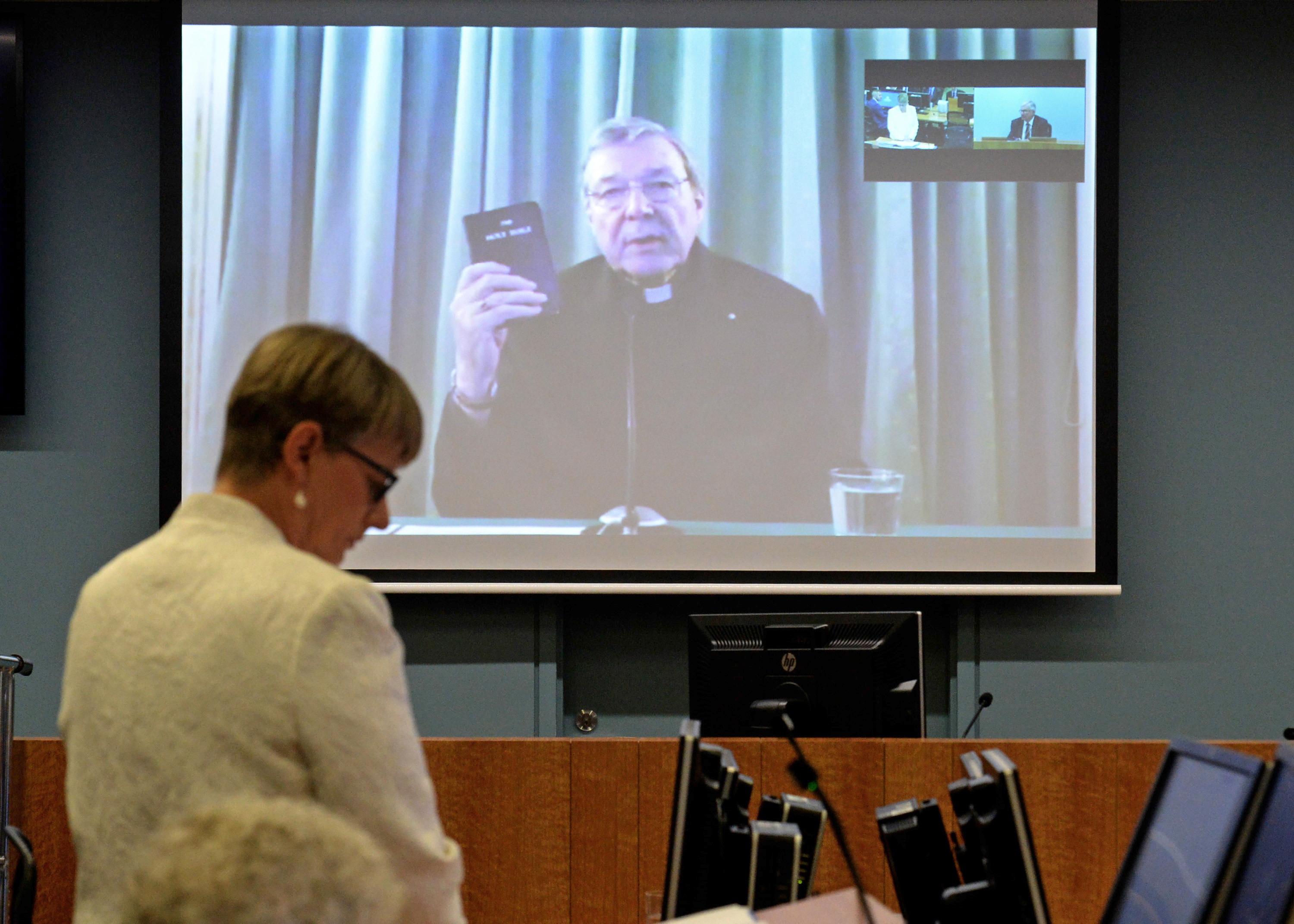 ROME -- One of Pope Francis' top advisers acknowledged Sunday that the Catholic Church "has made enormous mistakes" in allowing thousands of children to be raped and molested by priests over centuries as he testified at an extraordinary public hearing of an Australian investigative commission just a few blocks from the Vatican.

Australian Cardinal George Pell testified via videolink from a Rome hotel to the Royal Commission sitting in Sydney. In the front row of the conference room were two dozen Australian abuse survivors and their companions who had traveled across the globe to be on hand for Pell's testimony, a significant show of accountability in the church's long-running abuse saga.

The lead counsel assisting the commission, Gail Furness, questioned Pell about current Vatican efforts to address the scandal as well as Pell's past in Australia, including how he dealt with abuse allegations as a priest, educator and adviser to former Ballarat Bishop Ronald Mulkearns.

Pell asserted at the start: "I'm not here to defend the indefensible. The church has made enormous mistakes and is working to remedy those." He said the church had "mucked things up and let people down" and for too long had dismissed credible abuse allegations "in absolutely scandalous circumstances."

He termed Mulkearns' handling of Australia's most notorious pedophile priest, Gerald Ridsdale, as a "catastrophe for the church" and suggested that he would be a candidate for a proposed Vatican tribunal to hear the cases of negligent bishops. But Pell also acknowledged that he too had made mistakes in often believing the priests over victims who alleged abuse.

"I must say in those days, if a priest denied such activity, I was very strongly inclined to accept the denial."

It's the third time that the Australian cardinal, Pope Francis' top financial adviser, has testified about the sex abuse scandal, but the current round has generated intense international attention because it is taking place a short walk from the Vatican. In the conference room were media from Australia, the U.S., Italy, and Britain, as well as Rome-based priests and members of the Catholic community.

The commission, which is more than halfway through a 435-million Australian dollar ($300-million) government-authorized probe into how all Australian institutions dealt with abuse, agreed to let Pell testify from Rome because he was too ill to travel home. Two weeks ago, it also agreed to let victims be on hand to re-create the type of public hearing that Pell would have faced in Australia.

David Ridsdale, who was abused for four years by his uncle, Gerald Ridsdale, said victims in recent days had conducted more than 100 media interviews before Pell's testimony even began - and was grateful that the horror of what transpired in Ballarat was finally getting known outside of Australia. Gerald Ridsdale is in prison after being convicted of multiple abuse convictions.

The deeply Catholic town in Australia's Victoria state has been devastated by disclosures about the huge number of abuse victims, scores of whom have killed themselves in a cluster of abuse-related suicides unseen anywhere else. More than 40 people including abuse victims gathered at the Ballarat Town Hall to watch Pell's testimony on three television screens.

David Ridsdale said Ballarat's survivors merely want Pell to "stand up and take responsibility on behalf of the church" for what transpired in Pell's own hometown.

"We're here to seek the truth. We're here to heal our city," David Ridsdale said. "We have the highest suicide rate among men in Australia. We have some of the worst drinking and violence problems. And it all stems from that abuse."

Midway through the first of an expected three to four nights of testimony, Ridsdale seemed unimpressed by Pell's admission of the church's failings.

"Words are one thing. Actions are another," he said, in calling for a church-funded compensation scheme that addresses the fact that many survivors are so traumatized by their abuse that they cannot support themselves financially.

The commission's current hearings relate to Ballarat and how the Melbourne archdiocese responded to allegations of abuse, including when Pell served as a Melbourne auxiliary bishop.

Pell, who was born and raised in Ballarat, was ordained a priest there in 1966 and was a consultant to Mulkearns, who moved Gerald Ridsdale between parishes for years.

During the opening address at a Royal Commission hearing in Ballarat last week, the lawyer assisting the commissioner said that as a consultant, Pell would have been responsible for giving advice to the bishop on the appointments of priests to parishes.

Pell has long denied allegations that he was involved in transferring Gerald Ridsdale -- with whom he once lived at the Ballarat presbytery -- and said he never tried to buy the silence of Ridsdale's nephew, as he alleges. Pell said he had no suspicions that Gerald Ridsdale was a deviant: In fact, when Gerald Ridsdale was finally brought to justice, Pell accompanied him to court.

In a statement Sunday, Pell repeated his support for the Royal Commission's work, vowed to meet individually with victims who had travelled to Rome and said he hoped the coming days "will eventually lead to healing for everyone."

He said he had tied a yellow ribbon on the fence in the Our Lady of Lourdes Grotto in the Vatican Gardens in a show of solidarity with the "Loud Fence" movement launched in Ballarat to support survivors of abuse.

Pell has defended his response to the abuse scandal while a bishop and later the archbishop of Melbourne, though he has expressed regret over encounters with victims seeking compensation, saying he and others in the church failed in their moral and pastoral responsibilities to them.

Anthony Foster testified at an earlier inquiry that when he and his wife sought compensation over the abuse their daughters suffered, Pell showed a "sociopathic lack of empathy." Their eldest daughter was repeatedly raped by priest Kevin O'Donnell and committed suicide. Her younger sister was raped by the same priest and began binge drinking. One day while intoxicated, she was struck by a car and is now severely disabled.

Foster, who successfully petitioned the Royal Commission to allow survivors to be present for Pell's testimony, said it was "astounding and empowering for victims" that the commission was now sitting in judgment of Pell on a global stage.

"I feel as though we haven't just brought it to Rome. We've brought it to the world," Foster said Sunday. "This is to some extent showing the rest of the world how it can be done."

The Royal Commission, which the government launched in 2012, has no power to file criminal charges. But commissioners can note in their report whether they believe someone has broken the law and refer the matter to police and prosecutors.