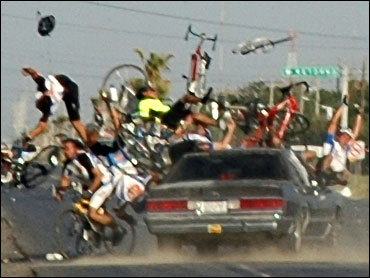 A car plowed into a bike race along a highway near the U.S.-Mexico border, killing one and injuring 10 others.

The 28-year-old driver was apparently drunk and fell asleep when he crashed into the race on Sunday, said police investigator Jose Alfredo Rodriguez.

A photograph taken by a city official showed bicyclists and equipment being hurled high into the air by the collision.

Authorities said the wreck happened 15 minutes into the 34-kilometer race Sunday along a highway between Playa Bagdad and Matamoros, across from Brownsville, Texas.

Campos said he is an American citizen living in Brownsville. The U.S. Consulate could not immediately confirm that.

"We are looking into the incident in terms of whether American citizens were involved," consulate spokesman Todd Huizinga said.