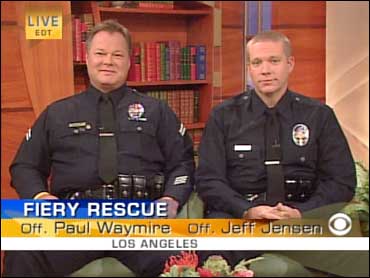 Two Los Angeles police officers are being hailed as heroes after they and some passersby rescued a man from a car moments before it burst into flames.

Officers Paul Waymire and Jeff Jensen were driving on the 170 Freeway in Sun Valley, Calif., a suburb in the San Fernando Valley northwest of Los Angeles, when they spotted a multi-vehicle accident.

One of the cars was partly on fire, and its driver was pinned. But, after several minutes of prying with the help of some members of the public, the officers managed to pull out the occupant of the car just before it was completely consumed in flames.

Waymire says he didn't even think of his family until the incident was over.

"The only thoughts going through my head at the time," he says, "were that we only had a few seconds at most to get him out of the car and we needed to get him out before the car exploded."

But he admits this "ranks right up there" among the most gratifying things he's ever done.

Waymire says that when they first got to the scene, "My partner grabbed the fire extinguisher and I ran to the car. We didn't know somebody was in there at first. And then everybody started yelling, 'There's somebody trapped! There's somebody trapped!' And, along with the help of a bunch of citizens, we were able to get him out in the nick of time."

Jensen tells Syler that the driver, 22-year-old Alexis Reinoso, "just had a look on his face that he wanted to be saved, obviously. And, towards the end, he was screaming because I think the — at least for me — the heat started getting hotter and hotter and hotter.

"So by the time we got him out of there, the flames were coming through the dashboard and underneath the car on the driver's side.

"When I extracted the victim out of the car and I was bringing him to safety, Officer Waymire, the extinguisher he was using had run out, and … the flames came from underneath, and the car just went fully engulfed."

Jensen adds that he and Waymire spoke with Reinoso and, "He let us know that he's doing well, and sounds like he's going to make a full recovery."