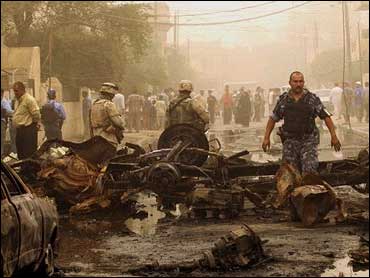 A suicide bomber driving a truck loaded with explosives slammed into a Baghdad police station Sunday, killing at least 22 people and wounding another 30, police and hospital officials said.

The attacker detonated his deadly charge at the Rashad police station in the eastern neighborhood of Mashtal around 2:50 p.m., said Capt. Mahir Abdul Satar. The vehicle crashed into sand barriers surrounding the police station.

More than two dozen cars, including two police cars, were seen burning and several nearby shops were damaged, police officials said. Body parts lay scattered throughout the explosion area. Charred remains of the vehicle used in the attack were still smoking.

A giant blackened crater marked the site of the explosion as rescue workers carried away bodies on stretchers. Emergency vehicles and firefighters rushed to the scene. Iraqi soldiers were seen firing in the air to disperse crowds.

It was the deadliest attack in Iraq since a suicide bomber blew himself up near a Shiite mosque July 16 in the central city of Musayyib, igniting a fuel tanker and killing nearly 100 people.

Insurgents have regularly targeted Iraq's police and security forces in attempts to further destabilize the country, which has been struggling to put together a new constitution and broad-based government.

The insurgency, one Western Diplomat told CBS News, is more sophisticated and more resilient. Iraqi commanders admit they are struggling just to keep up.

The mixed make-up of the committee was deemed crucial for drafting a constitution acceptable to all of Iraq's ethnic and religious communities, a key to any political exit from the unremitting violence and the need for American troops to remain in Iraq.

If Allawi's secular group joins the Sunnis in pulling out of the process, it raises the concern that a committee already dominated by Shiite religious parties and ethnic Kurds would be left in control of drafting the charter.

Al-Janabi also expressed anger over commission chairman Sheik Humam Hammoudi's announcement that a draft would be ready within days, saying it was "a draft that we were not consulted about and I don't know how it was written or who wrote it."

On Thursday, the 12 remaining Sunni members of the commission suspended their participation to protest the assassination of Sunni member Mijbil Issa and adviser Dhamim Hussein al-Obeidi by unknown gunmen. Two of the original 15 Sunni members had already resigned earlier over insurgent threats against them.

They had demanded an international investigation into the killings, better security and a greater Sunni role in deliberations.

On Sunday, no Sunni members showed up at a planned constitutional meeting though the group had indicated a day earlier that they were considering a possible return.

Shiite member Bahaa al-Araji said no decision will be taken "without the presence of the brothers (Sunnis) unless there is a reason for the absence. Therefore the committee will be committed to handing over the draft at the time agreed upon."

The threatened walkout by Allawi's group is the latest hurdle in the commission's goal of getting a constitution drafted and approved by the assembly on Aug. 15. That charter would then be scheduled for a public referendum two months later.

Voters in only three of the 18 provinces can scuttle the constitution if they reject it by two-thirds majority in the October referendum.