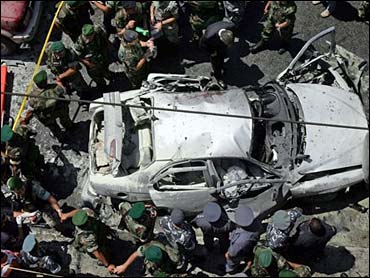 A prominent Lebanese journalist known for his anti-Syrian writings was killed after a bomb placed in his car exploded Thursday, police said, a slaying in the midst of parliamentary elections, free for the first time of overt Syrian interference.

"Samir Kassir was assassinated by the remnants of the security agencies that control the country and that is headed by Emile Lahoud," Walid Jumblatt, a vocal opponent of Syria, said on Future television.

"As long as the serpent's head is in Baabda, the assassinations will continue," he told Al-Arabiya television, referring to the presidential palace in the Beirut suburb of Baabda.

Lahoud's spokesman Rafik Shalala described as the murder as a "grave incident."

The explosion occurred midmorning in a Christian neighborhood of Beirut, setting the car on fire and killing the occupant. Police, who cordoned off the area around the vehicle, said the bomb was placed under the driver's seat.

Kassir's body lay slumped on one side inside the blasted sedan.

Kassir wrote a column in An-Nahar, the leading newspaper that frequently criticizes Syria and the former Lebanese government that was allied with Damascus.

"Every time Lebanon takes a step forward, there are those who want to undermine this country," Mikati said. Calling the murder painful, he ordered security agencies to take measures to uncover the circumstances of the bombing.

"We will not allow anyone to target security and freedom," Mikati said.

Neighborhood residents said the explosion occurred after Kassir, who lived across the street, got into his car. The blast shattered the windows of some nearby apartment buildings.

"I heard a loud explosion. I was thrown out of my place. People rushed and there was a car burning," said Manuel Izmizilian, who works at a nearby optician's shop.

Gibran Tueni, An-Nahar's general manager, linked the killing to the Feb. 14 bombing that killed former Prime Minister Rafik Hariri and 20 other people and to another explosion targeting an opposition lawmaker who escaped with serious injuries.

"The Lebanese security authorities and the remnants of the Syrian system in Lebanon, and directly the Syrian regime from top to bottom, is responsible for every crime and every drop of blood spilled," Tueni said.

The assassination of Hariri sparked massive anti-Syrian protest and intensified international pressure that forced Syria to withdraw its army from Lebanon in April, ending 29 years of political and military domination of its country.

"It's better not to make accusations until the circumstances are uncovered," Shalala told al-Arabiya.

Another newly elected opposition legislator for Beirut, Solange Gemayel, said Kassir campaigned in his writings against Syrian control and hegemony.

"It looks like we're not done yet with Syria," she said.

Michel Aoun, an opposition leader who was announcing his list of candidates for the upcoming parliamentary elections in central Lebanon, began the news conference with a moment of silence, describing Kassir as "one of the great journalists who never hesitated or was afraid to say the truth and defend Lebanon."

The killing sparked calls for anti-Syrian groups to band together after splintering during the parliamentary election campaign.

Tueni, who won a parliamentary seat for Beirut on Sunday, urged all opposition groups to come together and refocus on their opponents.

Lebanon is in the midst of parliamentary elections that began May 29 and run through June 19. Tueni won a seat for Beirut for the opposition last Sunday.

In his last column that appeared in An-Nahar's front page on Friday, Kassir lambasted Syria's lack of desire to enact rapid change, saying "reform for the (ruling) Baathists does not mean accepting opposing views."

"The huge regional changes from Iraq to Lebanon only drive them (the Baathists) to warn of U.S. dangers without thinking for a minute of the best ways to prevent this danger."