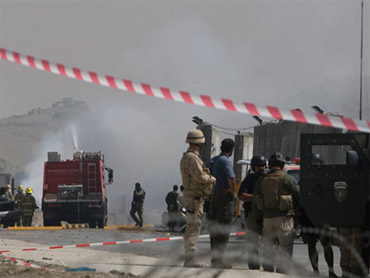 A car bomb exploded near the entrance to the military airport in Kabul early Tuesday in an apparent attack on a NATO convoy.

There were conflicting reports of casualties. Early reports from Afghan officials indicated at least three civilians were killed, but sources in the U.S. military told CBS News that there were injuries but no deaths.

The Taliban claimed responsibility for the blast, the third major attack by insurgents in the capital in four weeks.

There was no official report from U.S. and NATO forces on the incident or casualties, but the chief of Kabul's criminal investigation department, Abdul Ghafar Sayadzada, said three Afghan civilians were killed and six wounded.

Sayadzada said he was briefed by NATO forces, who said at least one international soldier was wounded.

The early morning blast rattled windows more than a mile away, and vehicles still burned more than an hour later as fire trucks ringed the area. Small blasts could be heard, likely from ammunition exploding inside the vehicles.

NATO Confirms Civilians Died in Airstrike
Karzai Has 54% of Fraud-Riddled Vote
For Obama, A Pivotal Moment in Afghanistan

A police official for the area, Rohullah, said the attack appeared to be against a NATO convoy. Like many Afghans, the official goes by one name.

A witness said he saw the car ram into a line of SUVs.

"I saw three or four Land Cruisers for the foreigners just in front of the gate ... then there was a car and it hit them, then blew up," said Humayun, who watched the attack from his nearby shop.

U.S. forces spokesman Lt. Col. Todd Vician confirmed an explosion south of the airport, but said he did not have details. The military airport used by U.S. and other international forces is right next to Kabul's civilian airport, but they have separate entrances.

In the run-up to Aug. 20 elections, a suicide attack near the main gate of NATO headquarters killed seven people and injured scores, gunmen briefly took over a bank in the city, and insurgents fired on the presidential palace on the same day that they unleashed a suicide car bombers on a NATO convoy.

Late Monday, two militants fired a rocket-propelled grenade at the rear gate of Camp Phoenix outside Kabul, NATO said, but said there were no injuries to anyone inside and no damage to the base. Afghan police said the two militants were killed.

No police were killed in the ambush, he said.

But as the convoy was returning to Pul-e-Khumri, the provincial capital, it was hit by a bomb that killed one policeman and wounded 17, two seriously, Barakzai said.