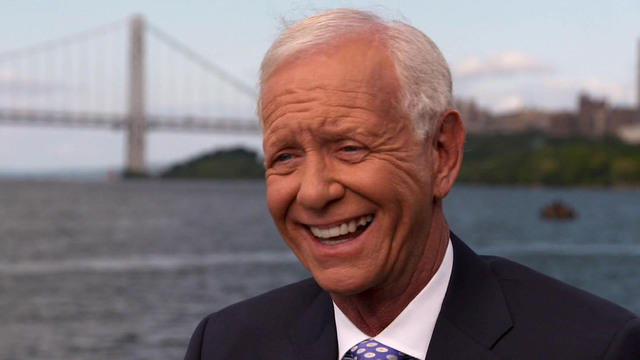 In 2009, U.S. Airways Captain Chesley “Sully” Sullenberger landed a passenger jet on the Hudson River, saving all 155 people on board.

“CBS This Morning” co-host Charlie Rose boarded a Coast Guard ship earlier this week with Sully, and sailed back to where his “Miracle on the Hudson” story unfolded.

Sully became a national hero, and is the center of a new movie directed by Clint Eastwood, starring Tom Hanks.

“Okay I want you to tell me this as candidly and honestly as you can. Ten pilots… face the same decision, decide to come into the Hudson to land this on the Hudson. How many would have done it?” Rose asked.

“There’s no way to know, but I’m convinced that a lot of my professional colleagues would find a way to do something similar and would find the way to save the lives of their passengers and crew,” Sullenberger said.

It’s been more than seven years since that “Miracle on the Hudson.” But returning to the river with Sully, it is evident the moment remains fresh on his mind.

“What could have gone wrong on the Hudson?” Rose asked.

“If we had touched with one wing too low, if we hadn’t had the wings exactly level, it would have spun us around. The aircraft might have broken apart. If we had landed with too great a rate of descent, the airplane may have broken apart and wouldn’t have floated long enough for the rescue to take place. If we had misjudged the height at which to begin the landing, even by a fraction of a second,” Sullenberger said.

Sully is played by Tom Hanks in a new movie directed by Clint Eastwood.

“Tom came to our home and spent almost half a day there. And one of the first things we talked about was the responsibility he felt, about playing a real person still living, but that after the film has run its course, I’ll have to go back to living my life. And he wanted to be sure he didn’t screw it up for me,” Sullenberger said.

In “Sully,” Hanks is at the controls with Aaron Eckhardt as co-pilot Jeff Skiles. Together, they take the audience through the harrowing 208 seconds of U.S. Airways Flight 1549.

“So Eastwood and Hanks got it, as far as you see, the moment and the personality. They captured it,” Charlie said.

“And the emotion. And… what I really wanted this film to have was a real undercurrent of the importance of our common humanity. And I think it’s there,” Sullenberger said.

“This is about a group of people at a time in the world’s history when it seemed as if everything was going wrong, during the ‘08, ‘09 financial meltdown. It seemed like no one could do anything right,” Sullenberger said. “And this group of people who didn’t know each other came together in this place, in this time, and made it their mission in life to see that every life was saved. Everyone knows that we landed, that everyone survived. And we celebrated that.”

“But they don’t know what happened after that,” Sullenberger said.

The 15-month investigation by the National Transportation Safety Board is the film’s central focus.

“One of the biggest frustrations for me and the NTSB board members with whom I’ve spoken about this is that,the NTSB made about three dozen important safety recommendations to improve safety going forward. But the NTSB cannot mandate that they be adopted by the industry,” Sullenberger said. “You know, that’s up to the FAA, our regulatory body to do. And sadly, only two or three of the 35 recommendations have been adopted by industry and mandated by the FAA.”

“There are a lot of reasons, but the bottom line ultimately is that the airlines in a very cost-competitive industry are reluctant to take on additional safety measures that they view as a burden or an additional cost,” Sullenberger said.

“Isn’t that an avoidance of public responsibility?” Rose asked.

“Did you make any mistakes?” Rose asked.

“Of course. It-- it wasn’t perfect, but it worked. And I was confident I could find something that would work,” Sullenberger said.

“And it changed your life forever?” Rose asked.