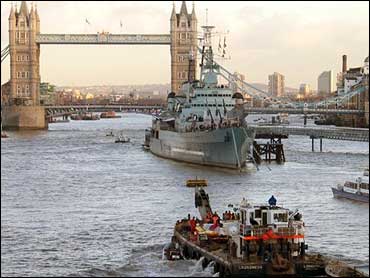 No choking for the Washington Capitals this time.

Joe Juneau's goal 6:24 into overtime lifted Washington to a 3-2 victory over the Buffalo Sabres on Thursday night, putting the Capitals into the Stanley Cup Finals for the first time in their 24-year history.

Brian Bellows set up the game winner when he swept around Darryl Shannon and tried stuffing the puck past Dominik Hasek. Juneau eventually grabbed the loose puck and sent the puck under Hasek's glove.

"The puck was there," Juneau said. "You want to go to the net and hope the puck comes out, and it finally came out."

Washington's Peter Bondra sent the game into overtime when he redirected Andrei Nikolishin's cross-ice pass past Hasek with 5:59 remaining in the third period and the Capitals on the power play.

The Capitals, who have won seven of their last eight road games, will play the winner of the Detroit-Dallas series for the Stanley Cup starting next week. The Red Wings lead the Western Conference series 3-2 with Game 6 set for Friday night in Detroit.

With the victory, the Capitals erased any doubts about whether they would blow a 3-1 series lead for the fourth time in 11 years. Washington allowed Buffalo to get back into the series by losing Game 5 before finishing off the Sabres.

"It's one of those things you have to fight through," Capitals veteran center Dale Hunter said of the blown series of the past.

"It's been a long time coming," added Hunter, who is seeking his first NHL title in his 18th season. "Having a chance to win the Stanley Cup is an unbelievable feeling."

Paul Kruse and Michael Peca scored for the Sabres, who were looking for their first appearance in the Stanley Cup since 1975. Esa Tikkanen scored the other goal for the Capitals, who won three of their four games over Buffalo in overtime.

Buffalo had two good chances in overtime, but Capitals goaltender Olaf Kolzig saved them as he had most of the game. He made a toe save on Jason Woolley early in the extra period and stopped Vaclav Varada on a breakaway.

Bondra's goal came moments after the Sabres had problems clearing the zone when Nikolishin trapped the puck along the boards and found Bondra alone in close. Bondra easily tipped the pass into the open side, setting up the third overtime game of the series.

Buffalo had appeared to be in control when Kruse was credited with a goal 7:40 into the period to give the Sabres a 2-1 lead. Bob Boughner's rebound from the point got lost in traffic in front of the net and went off Kruse before winding up in the net.

Bondra nearly had another goal earlier in the period when he tipped a shot from the point off the crossbar. Michal Grosek almost won it for Buffalo with 1:33 remaining in regulation when hs wrist shot rang off the post.

The game was shaping into another scoreless duel between Hasek and Kolzig before Peca and Tikkanen each scored their first goals of the series 22 seconds apart in the second period.

The Sabres thought they were on their way when Peca took Dixon Ward's drop pass in the left circle and beat Kolzig with a one-timer on Buffalo's 29th shot of the game with 6:56 left in the period.

Tikkanen answered moments later when he deflected Mark Tinordi's shot from the point into the short side while standing alone near the crease to tie the game 1-1.

Kolzig had been perfect and kept the Capitals in the game before allowing Peca's goal on a shot that went just under the goalie's arm. Buffalo had thoroughly outplayed Washington and was peppering Kolzig with shots through the first 33 minutes but could not pull away.

After managing just 16 shots in all of Game 5, the Sabres tested Kolzig 31 times in the first two periods and had far many scoring chances than the Capitals.

Sabres forward Brian Holzinger was stymied three times alone, twice on rebounds as Buffalo camped in front of the Washington net. Buffalo had 10 straight shots at one point in the first period but came away with nothing.

"Any time you beat the best goaltender in the world, it's satisfying," Kolzig said of Hasek, who led the Czech Republic to the gold medal in the Olympics and had an NHL-leading 13 shutouts this season.

Kolzig said the Capitals' veterans were the big reason they won the series.

"That's what got us through the character of the veterans."