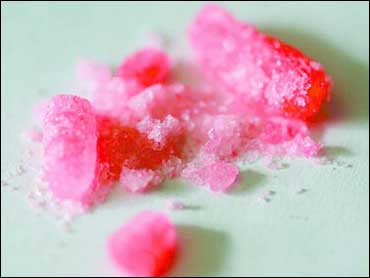 During an investigation last month, Arkansas police officers found a bundle of materials suspected of being used to cook methamphetamine in a trash can — but what gave them pause were the packets of a strawberry-flavored children's drink mix next to it.

From lollipops to high-sugar sodas, law enforcement officials say they've found meth cut with a variety of candies, drinks and other materials over the years. Officials say the "designer meth" can smooth the chemically rough ingestion of the drug, making it easier for first-time users to try.

"It's really a bitter substance ... so if you're going to try to make it more consumable for the masses, then you're going to want to try to take that edge off whichever way you can," said Chris Harrison, chief illicit laboratory chemist at the Arkansas lab.

"The drug cartels operate just like any other corporation would — if they want to increase their market share, then they're going to have to change something about it. This is just an evolution. They've saturated the heavy users, now they are moving onto some other people," he said.

The latest meth cut, known as "Strawberry Quick," uses powdered drink mix to give the drug a pink coloring. The sweetness of the powder can make meth more palatable and partially masks its harsh chemical taste.

The new cut has been the focus of several law enforcement bulletins in western states. While there have been several reported cases of police finding the cut in Arkansas, it is "not widespread," said William Bryant, assistant special agent in charge of the Drug Enforcement Agency's Little Rock district office.

"It's a different spin, like a marketing thing," Bryant said.

That marketing has taken a variety of forms for methamphetamine, found in powder and in a crystalized form similar to broken glass. Its low boiling point allows for it to easily be smoked or injected as a liquid into the bloodstream.

Because of its chemical properties, meth easily mixes into any water-based liquid. Caffeinated, high-sugar energy drinks and sodas often litter areas where meth cookers manufacture the drug, sometimes used as a chaser to the stimulant, Harrison said.

Outside of drinks, police also have seen meth mixed with a variety of candy, cola and chocolate flavors. Cutting it with something else also may help cutting down the burning sensation some have when snorting powdered meth, Harrison said. When snorted, he said meth can destroy a person's septum.

"You have some hard-core users that are prepared for the burn that methamphetamine will have," Harrison said. "Snorting it is supposed to be really hard on the nostrils."

Some meth cookers also have dyed meth different colors using a process similar to that used to make rock candy, though Harrison said it didn't help cover the taste.

"Strawberry Quick" came to prominence in January, after the Nevada Department of Public Safety issued a bulletin describing the type of meth there, said Steve Robertson, a Washington-based spokesman for the DEA. In the time since, Robertson says DEA agents have heard reports of flavored meth appearing in Missouri, Texas, Washington state and Wisconsin — though he stressed it was not a nationwide phenomenon.

"Traffickers are out there and are trying to sell it to customers, whether they are young customers or older, brand-new customers by changing the color or the taste or just giving it a less-intimidating name, they are trying to make it seem less dangerous and lure this new customer base," Robertson said. "If someone was completely terrified of trying it, it might diminish the threat."

The reports of flavored meth come as the DEA and local police department keep increased pressure on the drug's manufacturers. In 2005, the Arkansas Legislature required those purchasing over-the-counter medications that can be used to cook meth show identification and that the drugs be stored in a secure location. This year, the Legislature approved creating an electronic database to monitor sales of the medications.

Bryant says those crackdowns contributed the number of found methamphetamine labs in Arkansas dropping from 1,206 in 2004 to 446 last year. In the first quarter of this year, he said there have been only 56 labs found.

However, Harrison cautioned as the number of discovered labs has dropped, the amount of methamphetamine being seized by police has increased steadily. He said that could be coming from operations not being found by police, as well as meth coming into the state from the west coast and Mexico.

Rick Gallagher, assistant director of the state Crime Laboratory, said the drug remains one of the most abused in the state.

"It might vary from place to place like alcohol and marijuana, but you'd hear the word 'methamphetamine' a whole lot," Gallagher said.