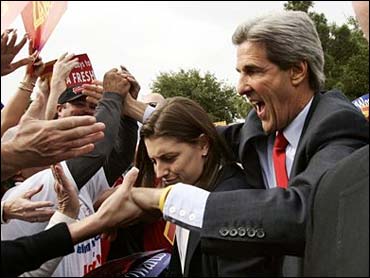 Sen. John Kerry says the United States is "in a bigger mess by the day," citing the murky fate of missing explosives in Iraq to sharpen the indictment of his opponent.

President Bush has put together an end game that includes persistent appeals for Democratic votes and a rarely used weapon in this bruising campaign — a positive commercial.

In the mail, on the phone and in courtrooms across the nation, activists, lawyers and partisans of all kinds intensified their efforts to shape the outcome.

With their agendas laid out, Mr. Bush and Kerry are going for spirit over substance in the final days, trying to create an aura of excitement in get-out-the-vote rallies and snag the dwindling pool of voters who haven't taken sides.

Rockers Bruce Springsteen and Jon Bon Jovi were rejoining the Kerry campaign, minstrels in his fast-moving gallery. California Gov. Arnold Schwarzenegger is bringing his star power — and moderate GOP reputation — to Mr. Bush's side later in the week.

Mr. Bush turned to the iconoclastic Democratic Sen. Zell Miller of Georgia to introduce him Wednesday at Pennsylvania and Ohio events, in keeping with his late-breaking appeals to Democrats who aren't sold on their own party's nominee.

The president has been talking up the "great tradition of the Democratic Party," citing the steeliness in crises shown by the likes of Franklin Roosevelt and John Kennedy, to make the point Kerry doesn't measure up.

Kerry mentioned those presidents and more, saying great U.S. leaders built alliances that protected this country while Mr. Bush "has failed in his fundamental obligation as commander in chief to make America as safe and secure as we should be."

The Democrat was focusing on economic troubles of the middle class in a Sioux City speech Wednesday before stumping in Minnesota and back in Iowa, at a Cedar Rapids event. Aides saw that speech and one Friday that will blend his campaign's economic and foreign policy proposals as his "closing arguments" for change.

After ripping Kerry for weeks as an equivocator, Mr. Bush planned to close the contest with a 60-second commercial meant to show he's steady, trustworthy and compassionate in these dangerous times.

Aides said the ad includes footage of an emotional president telling the Republican National Convention about meeting the children of slain U.S. soldiers.

Still, neither campaign was going upbeat, nor were their supporters.

Hard-hitting leaflets lined mailboxes in a dozen or so hotly contested states. A glossy mailing by the Pennsylvania Democratic State Committee showed burning roadside wreckage in Iraq, with U.S. soldiers looking on, and the headline "Wrong Choices ... Less Secure."

Kerry's latest ad accuses the Bush administration of failing to secure nearly 400 tons of explosives that disappeared from a military installation south of Baghdad around the time U.S. forces were toppling Saddam Hussein's government, and he pressed the point at rallies Tuesday.

He said in Green Bay, Wis., the explosives "could be in the hands of terrorists, used to attack our troops or our people."

Going beyond the known facts, he said later in Las Vegas that the explosives have actually been used against U.S. troops.

"We're in a bigger mess by the day and this president can't see it or can't admit it, but either way, America is less safe," Kerry said.

"If our troops had not gone into Iraq as John Kerry apparently thinks they should not have, that is 400,000 tons of weapons and explosives that would be in the hands of Saddam Hussein, who would still be sitting in his palace instead of jail," he said.

New state polls suggested the race was deadlocked in Florida, Ohio and Pennsylvania, the three most important battlegrounds in the race for 270 Electoral College votes. A Los Angeles Times survey joined a pile pointing to a national dead heat: Mr. Bush and Kerry were 48-48 in that poll.

With the possibility of another inconclusive election night looming, lawyers were already deep in courtroom entanglements in a variety of states over problems either anticipated or already experienced in states with heavy early voting.

In one example, a federal judge in Miami ruled against Democrats in saying Florida election officials will not be required to process incomplete voter registration forms.