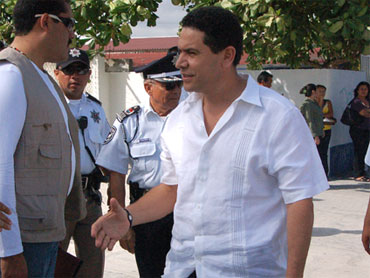 The mayor of Cancun was charged with drug trafficking ties Tuesday, forcing him to end his campaign for governor in a scandal that has shaken Mexico's upcoming state elections.

A federal judge indicted Gregorio Sanchez on charges of organized crime and money laundering a week after he was arrested in Mexico's most important tourist resort. Prosecutors say he protected two of Mexico's most brutal drug gangs and lived beyond his means.

The formal charges bar Sanchez from participating in politics, ending his run for governor of the Caribbean coast state of Quintana Roo.

Officials have said they cannot remember another Mexican candidate ever being charged with drug ties in the middle of a campaign, and leaders of Sanchez's leftist party say the allegations are politically motivated.

Jesus Ortega, president of the Democratic Revolution Party, called the charges "an aberration" and said the party would use every legal resource available to help Sanchez.

The July 4 elections in 10 Mexican states have already been marred by attacks and threats against candidates, fueling fears drug cartels are increasingly infiltrating politics through bribes and intimidation. One candidate for mayor of a northern town near the border with Texas was shot dead inside his business after ignoring warnings to drop out of the race.

In Sanchez's case, Judge Carlos Elorza said prosecutors had submitted testimony and documents indicating the mayor was using illegally obtained funds and had ties to the Beltran Leyva and Zetas cartels.

The federal Attorney General's Office has said the evidence includes several protected witnesses and documents from the Finance Department showing Sanchez made bank withdrawals amounting to more than $2 million, a sum that does not correspond to his declared income.

The Democratic Revolutionary Party says the mayor has a real estate business that explains his wealth. It has compared the case to last year's arrest of 12 mayors in the western state of Michoacan on drug charges just two months before state and congressional elections.

All but two of those officials have since been released for lack of evidence, feeding allegations their arrests were a political maneuver to bolster the government's tough image ahead of elections, though none of those mayors was a candidate.

Corruption scandals are nothing new in Cancun, whose white-sand beaches and raucous nightclubs make it a popular spring break destination for U.S. teenagers.

Former Quintana Roo Gov. Mario Villanueva was extradited last month to the U.S. to face charges of conspiring to import hundreds of tons of cocaine through Cancun.

Last year, Sanchez's police chief and other close collaborators were arrested for allegedly protecting cartels. The police chief was also questioned in the slaying of an army general hired to root out police corruption in the city, although he was never charged with that crime.

On Tuesday, President Felipe Calderon said his government won't relent in its fight against drug trafficking.

Calderon has deployed tens of thousands of soldiers and federal police across the country to fight drug traffickers since taking office in late 2006. Drug gang violence has surged since the deployment, claiming more than 22,700 lives.

In the Pacific coast of Guerrero, gunmen barged into a hospital Tuesday in the resort city of Acapulco and killed a police commander who was waiting to see a doctor, the state's public safety department said.

Also Tuesday, a 3-year-old girl was killed together with her father by gunmen who opened fire on their car in the border city of Ciudad Juarez, across from El Paso, Texas, authorities said.

Arturo Sandoval, a spokesman for the Chihuahua state prosecutors' office, said the girl was shot once in the neck.