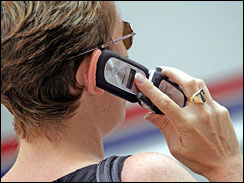 The debate is growing over whether cell phones should come with warning labels saying they may cause brain cancer.

San Francisco Mayor Gavin Newsom wants such labels. If he succeeds, it would make that progressive city the first in the nation to have such a requirement, and put the City by the Bay at odds with the Federal Communications Commission and the multi-billion dollar cell phone industry.

Newsom is calling for cell phone boxes to have labels much like cigarette packs, with what's called the radiation "absorption rate" for phones when they're sold. "The information exists, but not at the point of sale," Newsom says in a statement." He says he wants "radiation levels next to each phone, in a font at least as large as the price."

But the FCC says all cell phones sold in this country are safe, and even the American Cancer Society is on record as saying cell phones are "unlikely" to cause cancer.

Since cell phones only came into widespread use in the 1990s, many scientists say it could be years before long-term studies on cell phones and cancer are complete.

"Its' controversial," observes CBS News Medical Correspondent Dr. Jennifer Ashton. "There's no consensus yet in the scientific or medical community.

"Cell phones emit what we call non-ionizing radiation, which is thought to be safe. It's less than the radiation we get from the sun. But the thinking is that, if you have something very close to you, a lot of the time, (such radiation), even if it's a low dose, there's a potential that it can cause risk."

To minimize any risk you perceive may exist, Ashton suggests using hands-free devices or speaker phones when you're on your cell phone, and keeping it as far away from you as possible. She also stressed minimizing kids' use of cell phones.