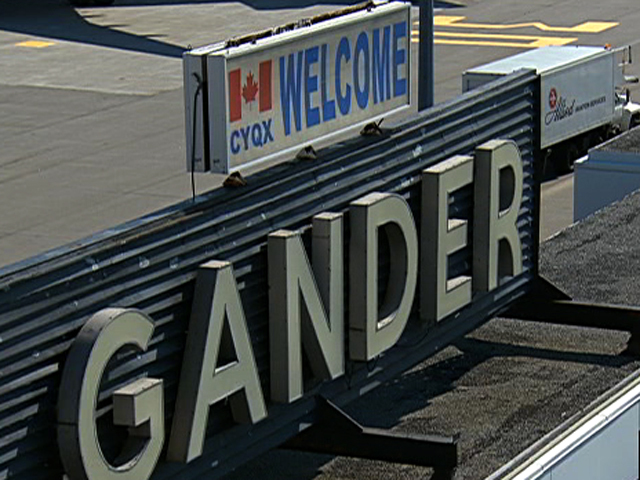 For many, the darkness of September 11 seemed to showcase mankind at its worst. But for thousands of airline passengers stranded in a remote town in eastern Canada, their experience showed mankind at its best.

Today, the town of Gander, in Newfoundland, will be honored at an awards ceremony in Washington, D.C., for its role on 9-11.

When U.S. airspace was closed on September 11, nearly 7,000 passengers and crew members bound for places like Miami, Dallas, and New York suddenly found themselves landing unexpectedly in the tiny town. But those passengers soon found out that, instead of being trapped, they were embraced.

CBS News Travel Editor Peter Greenberg reported on "The Early Show" Thursday that, just minutes after the terror attacks on 9/11, hundreds of passenger jets heading toward the United States were ordered to land.

Hannah and Dennis O'Rourke were on Aer Lingus flight 105, from Dublin to New York, when the plane they were on was diverted to Gander Airport, on the easternmost edge of Canada.

Gander International Airport, on a typical day, Greenberg said, has seven planes in and seven planes out. But all that changed on that Tuesday morning 10 years ago. In a span of just 90 minutes, the little airport was transformed into a major international hub. On that day, 38 jumbo jets carrying 6,700 passengers and crew found themselves on Gander's doorstep with nowhere to go and nowhere to stay.

He said, "That's sufficient for most of our needs on a day-to-day basis."

Greenberg asked, "So basically, you had a problem with about another 5,700 rooms to find?"

Elliott replied, "Yeah, but we knew we'd have no problem with that. We knew our people would come through."

And come through they did. In a matter of hours, the town of 9,000 mobilized a volunteer army to assist the "plane people," as they were being called, bringing food, medicine, and clothing to makeshift shelters in local schools and legion halls.

Striking bus drivers returned to work to provide transportation, and people opened up their homes to thousands of strangers.

Beulah Cooper was one of those who offered help. "We went into action," Cooper remembered. "And it was unbelievable how people opened their hearts and their doors."

For the passengers who had spent most of that first night on-board an airplane, it was only when they disembarked that the magnitude of the day's events finally set in. They were all together in what seemed to be the middle of nowhere.

One passenger stranded in Gander said at the time, "I think we were just happy to be on the ground at that point given what we had heard."

Another said following the day's tragic events, "I was more concerned about the people, the victims, and I felt quite lucky."

For Hannah and Dennis O'Rourke, the feelings of desperation shared by all Americans hit even closer to home: Their 44-year-old son, Kevin, a New York City fireman, had been one of the first responders at Tower One of the World Trade Center.

Dennis O'Rourke said, "It was horrible to see on TV what was happening. I looked at that and didn't want to alarm her, but I knew that no one was coming out of that."

For the days the O'Rourkes were in Gander, Beulah helped them cope.

Hannah O'Rourke told CBS News, "Beulah would take us out you know. to her house, take a shower, sit out and have a glass of wine and all that. She kept us going."

In the years following their ordeal, the so-called "plane people" have found ways to thank the people of Gander, setting up scholarships for local schools and even arranging for a piece of the World Trade Center to be brought to Gander as part of the town's memorial.

Two weeks later, the O'Rourkes' worst fears were confirmed -- their son Kevin was one of the nearly 3,000 people killed in New York on September 11. But 10 years after his untimely death, they credit the generosity of Gander for helping them through one of their darkest moments.

"We're bonded for the rest of our lives," Hannah O'Rourke said. "God bless the people of Gander. They're fantastic. Unbelievable."

Through the weekend, Gander is holding a reunion for all of those passengers who were stranded on 9-11 in that city. And this time, Greenberg noted, the people who expected to return, are coming, not because they have to, but because they want to.