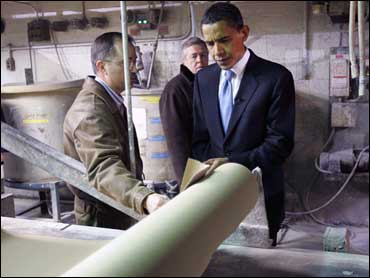 Barack Obama's senior economic policy adviser privately told Canadian officials to view the debate in Ohio over trade as "political positioning," according to a memo obtained by The Associated Press that was rejected by the adviser and held up Monday as evidence of doublespeak by rival Hillary Rodham Clinton.

The memo is the first documentation to emerge publicly out of the meeting between the adviser, Austan Goolsbee, and officials with the Canadian consulate in Chicago, but Goolsbee said it misinterprets what he told them. The memo was written by Joseph DeMora, who works for the consulate and attended the meeting.

"Noting anxiety among many U.S. domestic audiences about the U.S. economic outlook, Goolsbee candidly acknowledged the protectionist sentiment that has emerged, particularly in the Midwest, during the primary campaign," the memo said. "He cautioned that this messaging should not be taken out of context and should be viewed as more about political positioning than a clear articulation of policy plans."

Goolsbee disputed the characterization from the conservative government official.

"This thing about 'it's more about political positioning than a clear articulation of policy plans,' that's this guy's language," Goolsbee said of DeMora. "He's not quoting me.

"I certainly did not use that phrase in any way," he said.

The meeting was first reported last week by Canadian television network CTV, which cited unnamed sources as saying that Goolsbee assured the Canadians that Obama's tough talk on the North American Free Trade Agreement is just campaign rhetoric not to be taken seriously. The Obama campaign and the Canadian embassy denied there was any inconsistency between what the candidate was saying publicly and what advisers were saying privately.

NAFTA is widely opposed in economically depressed Ohio, which holds its presidential primary Tuesday and is a key battleground between Obama and Clinton. Both candidates said in a debate in Cleveland last week that they would renegotiate the trade agreement between the United States, Canada and Mexico, which is the largest trading partnership in the world, and threaten to pull out if it doesn't include more protections for workers and the environment.

"I think that's the kind of difference between talk and action that I've been talking about," Clinton told reporters while campaigning in Ohio. "It raises questions about Senator Obama coming to Ohio and giving speeches against NAFTA."

On Friday, Republican John McCain said the desire by his Democratic presidential rivals to renegotiate the terms of NAFTA would jeopardize crucial military support from Canada. (See related story.)

The memo obtained by the AP was widely distributed within the Canadian government. It is more than 1,300 words and covers many topics that DeMora said were discussed in the Feb. 8 "introductory meeting" between himself, Goolsbee and the consul general in Chicago, Georges Rioux.

Goolsbee "was frank in saying that the primary campaign has been necessarily domestically focused, particularly in the Midwest, and that much of the rhetoric that may be perceived to be protectionist is more reflective of political maneuvering than policy," the memo's introduction said. "On NAFTA, Goolsbee suggested that Obama is less about fundamentally changing the agreement and more in favour of strengthening/clarifying language on labour mobility and environment and trying to establish these as more `core' principles of the agreement."

Goolsbee said that sentence is true and consistent with Obama's position. But he said other portions of the memo were inaccurate.

"I think we should use the hammer of a potential opt-out as leverage to ensure that we actually get labor and environmental standards that are enforced," Obama said in the debate last week.

Goolsbee said he has been surprised that such a banal and trivial meeting with a low-level consulate official has created so much controversy and resulted in such an inaccurate depiction. He said he was invited to the consulate to meet the officials and get a tour.

He said the visit lasted about 40 minutes, and perhaps two to three minutes were spent discussing NAFTA. He said the Canadians asked about Obama's position, and he replied about his interest in improving labor and environmental standards, and they raised some concerns that Obama sounds like a protectionist.

He said he responded that Obama is not a protectionist, but that the Illinois senator tries to strike a balance between the economic struggles of working Americans and recognizing that free trade is good for the economy.

Tristan Landry, a spokesman for the Canadian embassy in Washington, said DeMora was not available for an interview Sunday. His only comment on the memo was to say that although consulate officials reach out to U.S. campaign officials to seek their views, "Canada does not in any way seek to interfere in U.S. electoral politics."

Canada supports NAFTA and does not want to see it interrupted.

The Canadian memo said that when Rioux "asked whether we could expect to hear more of this as the elections progressed, Goolsbee thought not. In fact, he mentioned that going forward the Obama camp was going to be careful to send the appropriate message without coming off too protectionist.

"As Obama continues to court the economic populist vote, particularly in upcoming contests like Ohio, we are likely to see a continuation of some of the messaging that hasn't played in Canada's favour, but this should continue to be viewed in the context in which it is delivered," DeMora wrote in the closing section.

Burton, who was on the call while Goolsbee described his visit to the AP, said, "It all boils down to a clumsy, inaccurate portrayal of the conversation."

Asked if he agreed with Burton's summary, Goolsbee said he did.